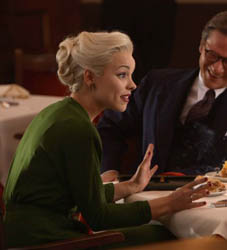 A wry blend of dark humor, romantic deception, and stylish melodrama, with an invigorating dash of suspense, ‘Married Life’ is an unconventional fable for grown-ups about the irresistible power and utter madness of love. After decades of marital contentment, Harry (Chris Cooper) concludes that he must kill his wife Pat (Patricia Clarkson) because he loves her too much to let her suffer when he leaves her. Harry has fallen hard for the young and lovely Kay (Rachel McAdams), but his best friend Richard (Pierce Brosnan) wants to win Kay for himself. As Harry implements his maladroit plans for murdering his wife, the other characters are entangled with their own deceptions. Like Harry, they race towards their passions but trip over their scruples, seemingly well-intended towards all, but truthful to none. Starring: Pierce Brosnan, Patricia Clarkson, Chris Cooper, Rachel McAdams, David Wenham Director: Ira Sachs Genre: Crime / Drama / Romance Release Date: March 7th, 2008
Continue Reading
Advertisement
You may also like...
Related Topics:Chris Cooper, Pierce Brosnan, Rachel McAdams