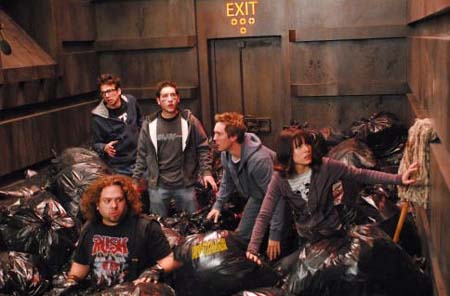 In “Fanboys,” a group of friends who are avid Star Wars fans travel west to see the Holly Grail of all sci-fi movies, “Star Wars: Episode I.” The year is 1999 and for these death star dorks, the Star Wars films are more than just movies; they are a way of life.

So, after one of the group takes sick it is nothing short of a moral imperative that the friends break into George Lucas’ Skywalker Ranch to watch the seminal sci-fi picture together before its release. Enlisting the help of an estranged friend, who has traded in his Darth Vader mask for a proper day job, the adventure lays way to some extremely funny situations, including an outrageous brawl with some hard-core Trekkies.

The Weinstein Company originally scheduled Fanboys for release a few years back but kept delaying it due to test screening complaints and other issues. It looks like the flick will finally hit theaters February 6, 2009.

Continue Reading
Advertisement
You may also like...
Related Topics:Star Wars