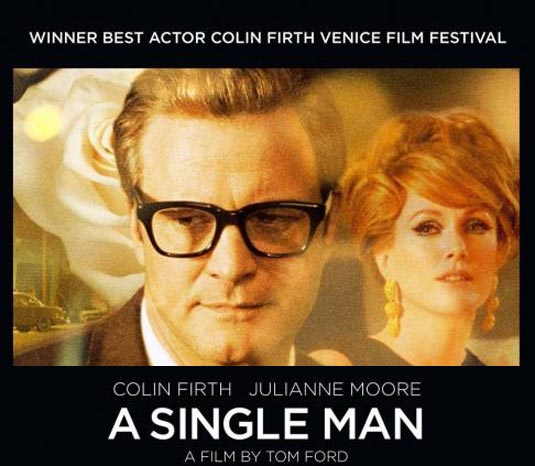 Check out trailer, poster and photos from upcoming drama “A Single Man“. “A Single Man” Synopsis: Set in Los Angeles in 1962, A Single Man is the story of George Falconer, a British college professor (Colin Firth) who is struggling to find meaning in his life after the death of his long-time partner, Jim (Matthew Goode). We follow George through a single day, where a series of encounters, ultimately leads him to decide if there is a meaning to life after Jim. George is consoled by his closest friend, Charley (Julianne Moore), a 48-year-old beauty, and is stalked by one of his students, Kenny (Nicholas Hoult).

Ryan Simpkins as Jennifer Strunk and Nicholas Hoult as Kenny

Colin Firth as George in A Single Man The story is an adaptation based on a novel by Christopher Isherwood and is directed by Forget Gucci! The fashion house’s former Creative Director Tom Ford. Ford might be on his way to earning a Golden Globe for “A Single Man”. The oeuvre is up for three awards: Colin Firth for Best Performance by an Actor in a Motion Picture-Drama, Julianne Moore for her supporting role, and Best Original Score. The ceremony will take place January 17, 2010 and we’ll see if Ford will earn another claim to fame.

You can find more images from upcoming film in our “A Single Man” Photo Gallery!