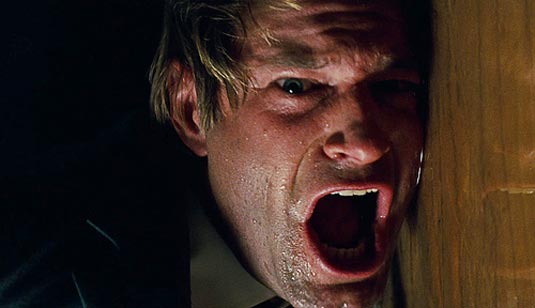 While promoting “Towelhead,” Aaron Eckhart revealed the future plans for Two-Face in the new Christopher Nolan-directed “Batman Begins 3“. Harvey “Two Face” Dent has been officially buried six-feet-under and won’t be coming back for “The Dark Knight” sequel and Aaron Eckhart, put an end to any speculation regarding the possibility of his character’s return in “Batman 3”. “He is dead as a door nail,” Eckhart confirms. “I asked Chris [Nolan] that question and he goes, ‘You’re dead’ before I could even get the question out of my mouth.” And if you think it’s all just a game he’s playing to keep it a surprise for his return, Eckhart really emphasizes that he ain’t coming back. “I think in contract negotiations it’s a problem,” he says. “No, I’m not coming back. I think unfortunately, Heath [Ledger] was supposed to go on and that didn’t work out. I’m nobody. I’m a cog. I have no say over this sort of stuff. I’m sure that there’s so many other characters that they could whip together.” He also admitted that he had asked Christopher Nolan the same thing when making the film, and the response was the same: “I asked Chris if there was a chance of coming back. “No way,” he said. “He’s toast.” [source: ComingSoon]
Continue Reading
Advertisement
You may also like...
Related Topics:Aaron Eckhart, Batman Begins, Christopher Nolan, The Dark Knight, Two Face