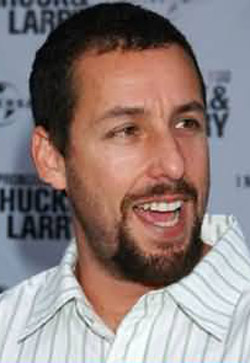 But now, when we learned that Adam Sandler will be the part of the voice cast – things are quite clear. All Sandler’s fans out there, get ready for the Genndy Tartakovsky‘s movie that will have some interesting names involved in the whole thing.

So, welcome to the Hotel Transylvania, Dracula’s lavish five-stake resort, where monsters and their families can live it up, free from meddling from the human world. But here’s a little known fact about Dracula: he is not only the Prince of Darkness; he is also a dad.

Over-protective of his teenage daughter, Mavis, Dracula fabricates tales of elaborate dangers to dissuade her adventurous spirit. As a haven for Mavis, he opens the Hotel Transylvania, where his daughter and some of the world’s most famous monsters – Frankenstein and his bride, the Mummy, the Invisible Man, a family of werewolves, and more – can kick back in safety and peace.

For Drac, catering to all of these legendary monsters is no problem – but his world could come crashing down when one ordinary guy stumbles on the hotel and takes a shine to Mavis.

As you already guess, Adam Sandler will voice the lead role of Dracula, and the rest of the voice cast includes Kevin James as Frank (also known as Frankenstein), Fran Drescher as Eunice, (his in-your-face, over-the-top, and larger-than-life Bride).

David Spade will voice Quasimodo (once the hunchback of Notre Dame and now a crazy, passionate gourmet chef always looking for his next piece de resistance), Steve Buscemi and Molly Shannon as Wayne and Wanda (a pair of married, harried werewolves, parents to an ever-increasing litter of pups, who are looking forward to their family vacation at the hotel), Cee Lo Green as Murray (a boisterous Mummy, once entertainer to the great Pharaohs, now the life of the party, and always feeling the urge to let loose and sing) and Andy Samberg as Jonathan (a 21-year-old regular guy, carefree and full of life, whose world travels land him at the Hotel).

On the other hand, we have no doubts in Tartakovsky’s work. After all, he’s the man behind the TV series such as Samurai Jack, Star Wars: Clone Wars and Dexter’s Laboratory.

Hotel Transylvania will be produced by Michelle Murdocca and the animation is by Sony Pictures Imageworks.

The film will be released on September 21, 2012, by Columbia Pictures.

Abigail Spencer Joins Oz, The Great and Powerful
Rodrigo Santoro as Jennifer Lopez’s Husband In What To Expect When You’re Expecting
Advertisement