Filming started on a tongue-in-cheek biopic of Adolf Hitler in Vienna on Tuesday, which producers say will be a “timeless parable” of the struggle between good and evil.

The film, “Mein Kampf” (My Struggle), is based on a play of the same name by the late Hungarian-Jewish playwright George Tabori and will premiere in Germany next year.

Rather than trying to present a historically accurate version of Hitler’s early life in Austria, the film, directed by Sweden’s Urs Odermatt, mixes reality and fiction with a hefty dose of irony.

“All this will be blended with a psychological profile of a future tyrant,” the producers said in a statement.

In the script, a fresh-faced Hitler played by German actor Tom Schilling arrives in Vienna with dreams of becoming a great artist. The true Hitler had ambitions to become an architect.

Short of money, he shares a room with two Jewish men, Lobkowitz, a failed cook, and a bookseller named Herzl, who takes the young Hitler under his wing. 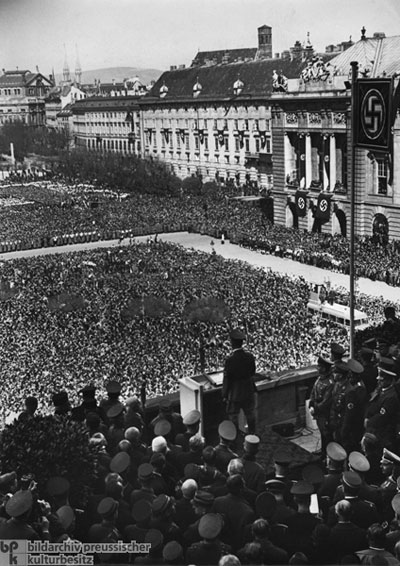 Although the movie shares the name of Hitler’s long, partially autobiographical book, in which he presents the Nazi ideology, his anti-Semitism and views on the Aryan “master race,” the choice of title is meant as a subversive joke.

In the film, it is actually Hitler’s Jewish roommate Herzl, played by German actor Goetz George, who is writing a book which he eventually decides to call “Mein Kampf.”

The ground-breaking Tabori play was first shown in Vienna in 1987 and encouraged audiences to face a painful national past through comedy.

Tabori, whose father was killed at the Auschwitz-Birkenau concentration camp, also directed and acted in the play, which became one of his most celebrated works.

German and Austrian-made comedies about Hitler have been rare, with directors preferring to focus on serious, realistic presentations such as Oliver Hirschbiegel’s 2004 film ‘Der Untergang’ (Downfall).

A 2007 German Hitler parody, ‘Mein Fuehrer — The Truly Truest Truth About Adolf Hitler‘ sparked controversy and scathing reviews in Germany after portraying the dictator as a bed wetter with erectile problems.

Filming of “Mein Kampf” will move on to Germany in May.