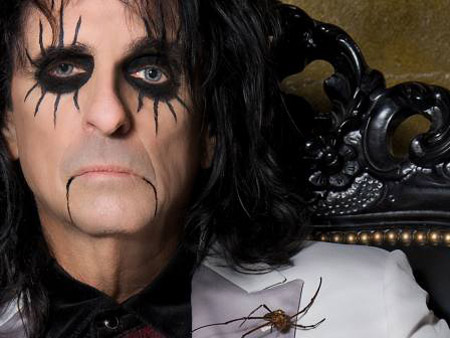 I’m sure you already know that Alice Cooper had a performance at London’s 100 Club and that he was joined on stage by Johnny Depp. That’s pretty cool thing, right?

And, all of the sudden, it looks that Cooper will join Depp for the upcoming Tim Burton‘s Dark Shadows.

That sounds even better? Ok then, check out the rest of this report for more details…

As you already know, Dark Shadows is a big screen adaptation of the cult ‘60s show that has some great cast on board. Johnny Depp, Jackie Earle Haley, Eva Green, Bella Heathcote, Michelle Pfeiffer, Helena Bonham Carter, Chloe Moretz and Jonny Lee Miller are all set to star in the movie.

Now, we should add Alice Cooper as well? Well, I guess so, because guys from Cooper’s site revealed that: “Johnny is in London working on the new Tim Burton movie ‘Dark Shadows’, and Alice is rumored to have a cameo part in the film as well…”

We already wrote about this project, but in case you’ve missed it, here’s the full synopsis part once again:

“In the year 1752, Joshua and Naomi Collins, with young son Barnabas, set sail from Liverpool, England to start a new life in America. But even an ocean was not enough to escape the mysterious curse that has plagued their family. Two decades pass and Barnabas (Johnny Depp) has the world at his feet-or at least the town of Collinsport, Maine.The master of Collinwood Manor, Barnabas is rich, powerful and an inveterate playboy…until he makes the grave mistake of breaking the heart of Angelique Bouchard (Eva Green). A witch, in every sense of the word, Angelique dooms him to a fate worse than death: turning him into a vampire, and then burying him alive.

Burton is directing and producing Dark Shadows from a screenplay by Seth Grahame-Smith, story by John August and Grahame-Smith, based on the television series created by Dan Curtis.

At the end, let me remind you that Dark Shadows is being filmed entirely in England, both at Pinewood Studios and on location.