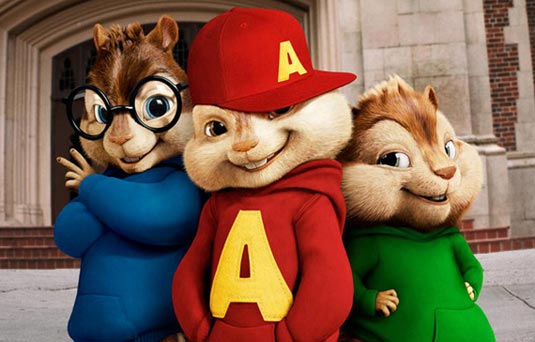 Alvin and the Chipmunks 2: The Squeakquel is the second installment in the “Chipmunks” franchise. This movie hits it’s target market right where they intended, but, grown ups may not be so entertained. When we catch up with our favorite talking rodents they are traveling the world on tour. Alvin, voiced by Justin Long, is the center of his own universe. While Simon, voiced by Matthew Gray Gubler, and Theodore, voiced by Jesse McCartney, are happy in the background playing the teammate’s roles. Dave, played by Jason Lee, is at his wits end with Alvin and is trying to calm down his showboating when he’s thrown across the stage and seriously injured. Having to rest, Dave plans for his boys to go home and be taken care of by his aunt. While Dave rests the boys are set to lead a normal life that includes going to school… In the same way that the helium-voiced mouse chorus was a delight in Babe, Alvin, Simon and Theodore’s high-pitched renditions of “Bad Day” by Daniel Powter and “Funkytown” by Lipps Inc. in the first film had a certain cutesy charm. For the sequel, the diminutive trio meets its match in three feisty females, who trill with attitude through “Single Ladies (Put A Ring On It)” by Beyonce, “Hot N Cold” by Katy Perry, “So What” by P!nk and “Put Your Records On” by Corinne Bailey Rae. Girl power is alive and well in Alvin And The Chipmunks 2: The Squeakquel…read more [LondonNet]

It’s hard to resist any film with such a silly subtitle. But even without it this is superior, cutesy fare for anyone who can’t get enough of ‘Surprised Kitty’ on YouTube. The chipmunks, though capable of selling out stadia all over the world, find themselves forced to attend high school. They’re also confronted by a bullying ex-manager who manufactures an all-girl trio – The Chipettes – that threatens to rival them in popularity…read more [Telegraph.co.uk]

Call it a Christmas miracle, albeit a minor one: “Alvin and the Chipmunks: The Squeakquel” isn’t entirely awful. In fact, for its young (or merely immature) target audience — your average fourth-grader — this sequel to the 2007 feature about an animated trio of squeaky-voiced singing rodents is a fair sight better than the original. That’s not saying a lot, admittedly. The first film held essentially the same appeal as a party balloon filled with helium. Sure, it makes people sound funny, just like fur-ball protagonists Alvin, Theodore and Simon, in fact. As in the earlier film, they’re voiced by Justin Long, Jesse McCartney and Matthew Gray Gubler, in a CGI version of the novelty musical act created by Ross Bagdasarian in 1958. But how far can you go with that one joke?…read more [The Washington Post]

Zachary Levi stars as Toby Seville in Alvin and The Chipmunks 2 Through cartoons, TV puppet shows, Grammy-winning records and now CG-enhanced movies, Alvin And The Chipmunks have been entertaining kids and giving their parents tinnitus for over 50 years. You’d think that their voices would have broken or the US government would have had them shot as a health hazard by now. But here they are, over 50 and only just going to high school. When their hapless human guardian Dave (Lee) is hospitalised during a typically rowdy gig, cocky Alvin, speccy Simon and pudgy Theodore are sent to live with his aunt… who is immediately hospitalised. See? Health hazard…read more [Movies.Sky.com]

The film is like watching a marathon Top of the Pops devoted only to novelty Christmas hits and even small children who adore cute critters will surely be bored by the procession of pop covers. The thin story sees the tiny trio forced to attend High School where they struggle to fit in but still manage to secure the chance to represent their classmates at a battle of the bands contest…read more [ThisIsNottingham]

Kevin G. Schmidt stars as Ryan and Chris Warren Jr. stars as Xander in Alvin and The Chipmunks 2 The simplistic, linear plot holds no surprises, incorporating a boo-hiss, high-school jock villain (who naturally gets his comeuppance), wholesome lessons about friendship and self-sacrifice, and chaste romance that nervously approaches the kissing stage. If you didn’t like the original Alvin And The Chipmunks, it’s safe to say that the follow-up won’t shake your groove thing either…read more [The Bolton News]

The lights flare, a guitar wails, and the crowd of screaming pre-teen girls goes wild. Then, the stars of the show burst onto the stage – three fur balls, mere inches high and better known as Alvin, Theodore, and Simon. With the help of a little auto-tune and a lot of pitch shifting and CGI, these chipmunks sure know how to shake it. But this time around, they’re facing stiff competition from an equally groovy and even more high-pitched trio of females – The Chipettes…read more [3news.co.nz]

Alvin and The Chipmunks 2 Poster

Did You Hear About The Morgans? Review
“Nine” Review
Advertisement