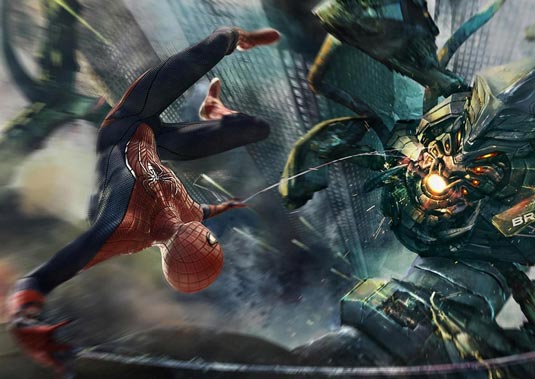 It’s an exciting day for those in and around downtown Manhattan, since they could see the Marc Webb-helmed The Amazing Spider-Man 2 set, with production moved to the Wall Street area for scenes that apparently involve Spider-Man scaling the walls of some of New York’s famous/notorious financial institutions. Check them out after the jump.

We’re not sure whether the location actually factors into the plot or if this is just a convenient place for them to shoot, but regardless, after the official ones that gave us first look at Jamie Foxx as Electro/Max Dillon and the new Harry Osborn, Dane DeHaan, these are some of the first images we’ve seen of Spider-Man in action on the set of the 2014 sequel. Synopsis:

In “The Amazing Spider-Man 2,” for Peter Parker (Andrew Garfield), life is busy – between taking out the bad guys as Spider-Man and spending time with the person he loves, Gwen (Emma Stone), high school graduation can’t come quickly enough. Peter hasn’t forgotten about the promise he made to Gwen’s father to protect her by staying away – but that’s a promise he just can’t keep. Things will change for Peter when a new villain, Electro (Jamie Foxx), emerges, an old friend, Harry Osborn (Dane DeHaan), returns, and Peter uncovers new clues about his past.