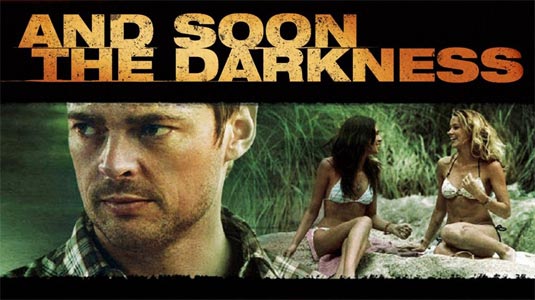 Stephanie (Amber Heard) and Ellie’s (Odette Yustman) vacation to an exotic village in Argentina is a perfect “girl’s getaway” to bask in the sun, shop and flirt with the handsome locals. After a long night of bar-hopping, the girls get into an argument, and Stephanie heads out alone in the morning to cool off. But when she returns, Ellie has disappeared. Finding signs of a struggle, Stephanie fears the worst, and turns to the police for help. But the local authorities have their hands full already – with a string of unsolved kidnappings targeting young female tourists. Skeptical of the sherifs competency, she enlists help from Michael (Karl Urban), an American ex-pat staying at their hotel. Together they go on a frantic search for Ellie, but Stephanie soon realizes that trusting his seemingly good intentions may drag her farther from the truth. With danger mounting, and time running out, Stephanie must find her friend before darkness falls.

And Soon the Darkness, remake of a British film from the 70’s of the same name, opens in limited release on December 17. [source: Dread Central]

What do you guys think of it?

And Soon the Darkness Poster

And Soon the Darkness Poster