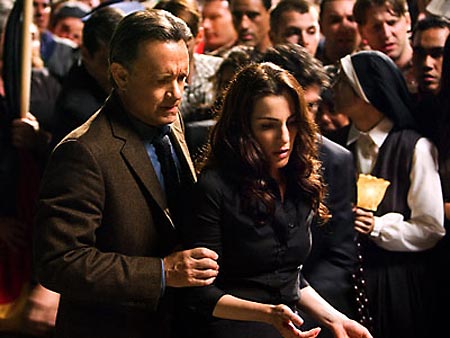 Have a look at the Super Bowl TV Spot for the highly anticipated “The Da Vinci Code” prequel, “Angels & Demons,” based upon the bestselling novel by Dan Brown. In the film Langdon discovers evidence of the resurgence of an ancient secret brotherhood known as the Illuminati – the most powerful underground organization in history – he also faces a deadly threat to the existence of the secret organization’s most despised enemy: the Catholic Church. When Langdon learns that the clock is ticking on an unstoppable Illuminati time bomb, he jets to Rome, where he joins forces with Vittoria Vetra, a beautiful and enigmatic Italian scientist. Embarking on a nonstop, action-packed hunt through sealed crypts, dangerous catacombs, deserted cathedrals, and even to the heart of the most secretive vault on earth, Langdon and Vetra will follow a 400-year-old trail of ancient symbols that mark the Vatican’s only hope for survival. The film is directed by Ron Howard (Willow, Backdraft to Apollo 13, A Beautiful Mind, The Da Vinci Code), stars again Tom Hanks and Ayelet Zurer, Ewan McGregor, Pierfrancesco Favino, August Fredrik, Stellan Skarsgård. “Angels and Demons” opens in theaters May 15th, 2009.
Continue Reading
Advertisement
You may also like...
Related Topics:Angels and Demons, Ayelet Zurer, Dan Brown, Ewan McGregor, Ron Howard, Super Bowl, Tom Hanks