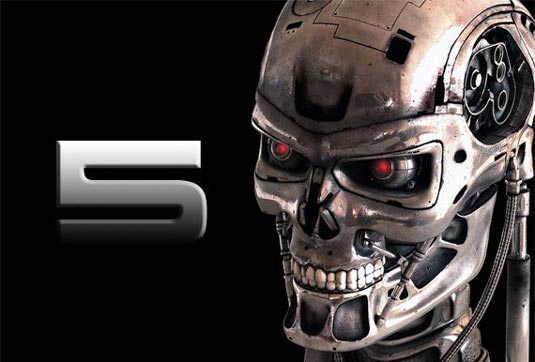 Terminator 5 finally showed new signs of life last week, with reports that a pair of screenwriters have been recruited by Oscar-nominated Zero Dark Thirty producer Megan Ellison. Also, the T-800 himself, Arnold Schwarzenegger, promises he’ll be appearing in the fifth Terminator installment, even amidst recent speculation about whether or not that remains the plan (not to mention, if that’s indeed a good idea). Laeta Kalogridis (Shutter Island) and Patrick Lussier (My Bloody Valentine 3D) are currently putting together a Terminator 5 script for Ellison, nearly two years after the budding Hollywood power player purchased the Terminator franchise rights. Some of you have probably speculated that the plan is for T5 to return the series to its roots, by resurrecting the format of James Cameron’s original movie – which combines slasher/horror scenes with sci-fi pop action – and moving away from the mythos building that culminated in Terminator Salvation (similar to how Riddick is taking the Vin Diesel franchise back to its Pitch Black origin, after Chronicles of Riddick). That would explain the hiring of a writing duo like Kalogridis and Lussier, who have solid backgrounds in the sci-fi and horror genre. Schwarzenegger confirmed that he’s set to appear in Terminator 5, according to Bleeding Cool. Obviously, ‘the last action hero’ is no longer convincing as the ageless T-800; BUT, if the story introduces Arnold as, say, a gruff fighter in the war against Skynet – one who the machines view as a fitting model for their new line of robots – his presence might avoid becoming a burden (or feeling of him being forced into the film). Not to mention, it could allow overriding (or just plainly ignoring) of events in Salvation, which is something Justin Lin hinted at doing back when he was directing. Either way, T5 offers a chance to create a serious (and less satirical, as well) background story for the T-800′s human inspiration than this infamous cut scene from Terminator 3: Rise of the Machines: All in all, the easiest way to bring Arnold back into the story (without creating more narrative gaps) could be to just break from the continuity of both Rise of the Machines and Salvation and revisit the simplified format of the first and second installments. Making the actor human, this time around, would suffice on a practical level and as a sign of respect to his age. More on Terminator 5 soon (hopefully).