It’s never too early for Oscar! Proof is the first trailer for director John Wells’ (The Company Men) adaptation of the Pulitzer and Tony-winning play August: Osage County by Tracy Letts who also wrote the screenplay version of this one. The all-star cast of August: Osage County includes Meryl Streep, Julia Roberts, Chris Cooper, Sam Shepard, Benedict Cumberbatch, Juliette Lewis, Ewan McGregor, Abigail Breslin, Dermot Mulroney and Margo Martindale. The trailer does a great job of teasing the film’s ensemble cast, which is ferociously good. The high-profile project in the vain of Little Miss Sunshine meets The Help isn’t scheduled to open until November 8th, 2013. Harvey Weinstein produced the film alongside George Clooney and Grant Heslov. Shepard plays Weston family patriarch Beverly, Streep plays Bev’s strong-willed wife, Violet, Roberts is Barbara, the Weston’s oldest daughter, and her knock-down scenes opposite Streep already seem to crackle in the teaser. Okay, check out the very first trailer and see for yourself. Here’s a brief synopsis:

The story of the strong-willed women of the Weston family, whose lives have diverged until a family crisis brings them back to the Midwest house they grew up in, and to the dysfunctional woman who raised them. 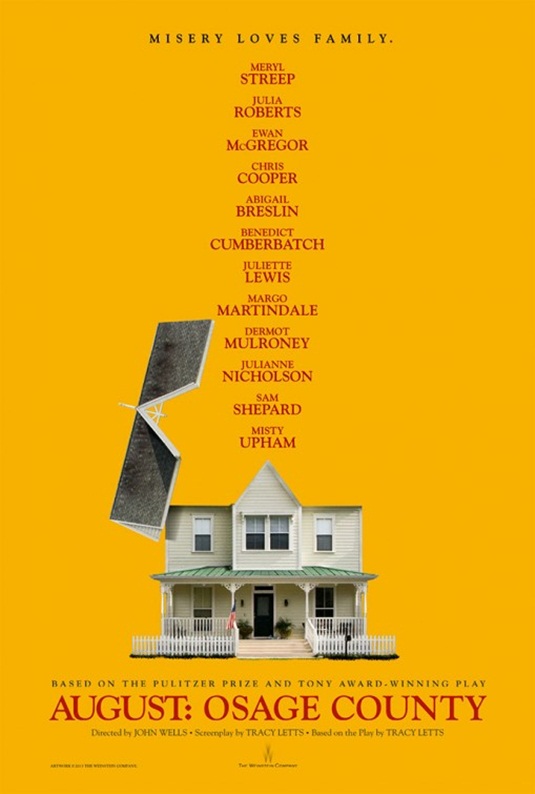