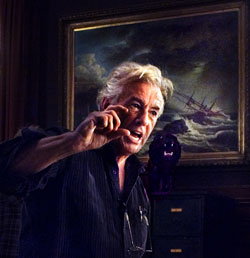 “Basic Instinct” director Paul Verhoeven has written a book that contradicts biblical teaching by suggesting that Jesus might have been fathered by a Roman soldier who raped Mary.An Amsterdam publishing house said Wednesday it will publish the Dutch filmmaker’s biography of Jesus, “Jesus of Nazareth: A Realistic Portrait,” in September.

Verhoeven is best known as the director of blockbuster films including “Basic Instinct” and “RoboCop,” but he is also a member of “Jesus Seminar,” a group of scholars and authors that seeks to establish historical facts about Jesus.

Marianna Sterk of the publishing house J.M. Meulenhoff said the book includes several ideas that run contrary to Christian faith, including the suggestion that Jesus could be the son of a Roman soldier who raped Mary during a Jewish uprising against Roman rule in 4 B.C.

The book also claims that Judas Iscariot was not responsible for Jesus’ betrayal, she said.

The movie director’s claims were greeted with some skepticism among those who have dedicated their careers to studying the life of Jesus. One issue is that there is very little information about the life of Jesus outside of the Gospels. The Gospels as understood by Christians for nearly 2,000 years do not support Verhoeven’s ideas.

Continue Reading
Advertisement
You may also like...
Related Topics:robocop