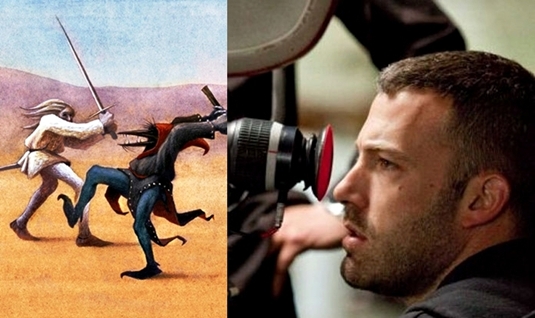 Sailing Noah’s Ark into the present is a theme that recurs throughout Stephen King’s epic novel The Stand, where 99.6 percent of America and the world is killed by a biological weapon unleashed from a U.S. Military installation in California. Well, Ben Affleck has reportedly been chosen by Warner Bros. to shipping such a big vessel. Oscar-winning writer and director of Gone Baby Gone and The Town, the screenwriter/ actor turned acclaimed director who is currently making Argo, is now top choice to replace Harry Potter director David Yates who was, a few months before, rumored that would create a big screen version of King’s mammoth novel about the end of the world and the battle between good and evil. Back in May, the studio announced this project would reteam screenwriter Steve Kloves with Yates, possibly over three films. As of now, there’s no word if Kloves is still in or why Yates is out. The Stand is something massive and because those two guys successfully took another massive property, Harry Potter, this move made sense. On the other side, King’s mammoth book is type of source material that isn’t defined yet in Affleck’s wheel house. However, Affleck has proven his skills as a director and screenwriter, and Warners love him, that’s sure. The roles of survivors who share the same apocalyptic dreams in the upcoming big-screen adaptation has yet to be cast. King’s The Stand was adapted to the okay, but not great miniseries back in the ’90s, with Gary Sinise and Molly Ringwald playing the leads. Watch the trailer below. Do you believe that The Stand is the perfect material to help Affleck make that leap into a new genre? Stay tuned. [youtube]http://www.youtube.com/watch?v=0HwSiCPs8wQ[/youtube]