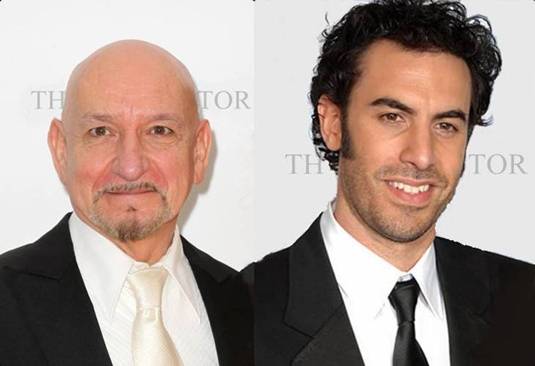 Ben Kingsley and Sacha Baron Cohen, acquaintances from the mystery film Hugo Cabret (that will be released just in time for Thanksgiving), this time co-star in a new Paramount comedy titled The Dictator. Cohen’s longtime collaborator Larry Charles, director of both, Borat and Bruno, will direct from a script Cohen co-wrote with fabulous Seinfeld penners Alec Berg, Jeff Schaffer and Dave Mandel. The story follows a heroic dictator who risks his life to ensure that democracy never comes to the country he lovingly tyrannizes. It was said previously that Cohen’s main character has been inspired by deposed Iraqi President Saddam Hussein, condemned for its systematic, widespread and extremely grave violations of human rights. But right now, that is no longer mentioned. Cohen will play both goats’ keeper and foreign ruler who during a visit to America turns corner on his career. Kingsley will co-star playing one of two Middle Eastern characters that appears in the film, probably with Jason Mantzoukas (The League), who’s in talks to play the other role. Anna Faris, Kristen Wiig and Gillian Jacobs (Community) are in contention for a female lead as a worker from supermarket, a role that reportedly requires strong improvisational skills. Cohen will also co-produce with Scott Rudin and abovementioned Seinfeld’s team. Kingsley, who lately starred alongside Jake Gyllenhaal in Prince of Persia: The Sands of Time, will be next seen as Papa Georges in aforementioned Hugo Cabret, the feature that rejoin the Oscar-winning actor with his Shutter Island veteran-helmer Martin Scorsese. The Dictator is to begin production next month in New York and Morocco, and planed May 16th, 2012 release date. Follow us on Twitter or Facebook on the day of the Royal Wedding.
Continue Reading
Advertisement
You may also like...
Related Topics:Anna Faris, Ben Kingsley, Jason Mantzoukas, Kristen Wiig, Sacha Baron Cohen, Scott Rudin, The Dictator

Ron Howard Set to Direct Amnesty Based on a Script by Max Landis
Arnold Schwarzenegger to Star in Cry Macho Before Terminator 5?
Advertisement