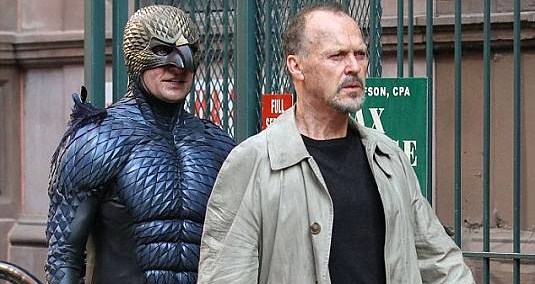 Alejandro González Iñárritu‘s upcoming black comedy Birdman, remember this one? C’mon, we already talked about the project – Michael Keaton plays an iconic superhero who struggles to mount a Broadway play (and stuff like that).Yep, sounds familiar now, but guess what? Today we have the very first set photos to share with you, and as you’re about to see – the whole thing looks fantastic! So, the principal photography began last month in New York City, and the first set photos with the leading star (Keaton aka Riggan Thomson in this one) have arrived. Together with a huge blue bird (he’s stalking Keaton, or what?) Never mind, the costume looks pretty cool, so we forgive him.

Anyway, as we previously reported, Iñárritu directs the whole thing from a script he co-wrote with Nicolas Giacobone, Alexander Dinelaris, and Armando Bo which revolves around:

…an actor – famous for portraying an iconic superhero – as he struggles to mount a Broadway play. In the days leading up to opening night, he battles his ego and attempts to recover his family, his career, and himself.

So yes, we’re pretty excited about this project. Which means – with every new update we’ll be back. In the meanwhile, click on all these images to take a better look & stay tuned for more!