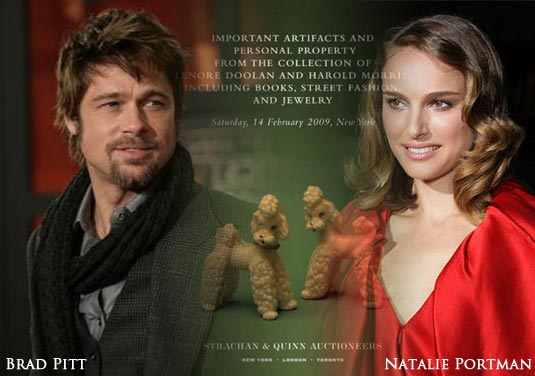 According to Variety, Brad Pitt and Natalie Portman will be teaming up in a film based on the new Leanne Shapton book “Important Artifacts and Personal Property from the Collection of Lenore Doolan and Harold Morris, Including Books, Street Fashion, and Jewelry.” Pitt’s Plan B Productions, along with Portman’s Handsomecharlie Films will produce the film. The book takes the form of Sotheby‘s-like estate auction catalog, with 325 entries and photographs depicting items that reveal the private moments and the rise and fall of a four-year relationship between the fictitious couple Hal Morris (a 40ish photographer) and Lenore Doolan, (a New York Times food columnist in her late 20s). Falling under the genre of romantic comedy, Pitt will play Morris while Portman takes on the role of Doolan. Pitt,  will co-star this year in Quentin Tarantino‘s “Inglorious Basterds.” Portman, 27, last starred opposite Scarlett Johansson in “The Other Boleyn Girl.” Portman has also recently been rumored to be circling Marvel’s Thor, but an official casting announcement has not yet been made.
Continue Reading
Advertisement
You may also like...
Related Topics:Brad Pitt, Natalie Portman