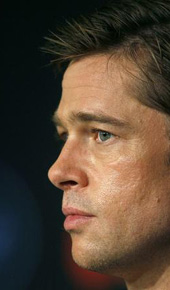 Brad Pitt might be one of the lead roles in Quentin Tarantino‘s upcoming World War Two film “Inglorious Bastards.” The Oscar-winning writer-director has confirmed he will start production in October on his long-gestating World War II epic, “Inglorious Bastards.” And while there’s been no official announcement, Pitt’s name has surfaced for one of the leads. According to Hollywood Reporter, Tarantino plans to do the bulk of the shooting in Europe:

Since the production will film in Europe and is looking toward an accelerated production schedule so that it can be finished in time to submit to May’s Festival de Cannes, the Weinsteins are looking to join forces with a major studio to come aboard to co-finance in exchange for foreign rights.

That would seem to fit Pitt’s schedule, having set up a homebase in France awaiting Angelina Jolie’s birth.
Continue Reading
Advertisement
You may also like...
Related Topics:Brad Pitt, Inglorious-Bastards, Quentin Tarantino