Today we have a new poster and seven photos from the upcoming crime film Gangster Squad, a colourful retelling of events surrounding the LAPDs efforts to take back their nascent city from one of the most dangerous mafia bosses of all time. Gangster Squad – a mobster film set in 1940s Los Angeles stars Josh Brolin, Ryan Gosling, Nick Nolte, Emma Stone and Sean Penn.

Gangster Squad, directed by Ruben Fleischer, from a screenplay written by Will Beall, was originally set to be released September 7th, 2012, but in the wake of the 2012 Aurora shooting, the film was bumped to a January 11th, 2013. Here’s the synopsis for the film

Los Angeles, 1949. Ruthless, Brooklyn-born mob king Mickey Cohen (Sean Penn) runs the show in this town, reaping the ill-gotten gains from the drugs, the guns, the prostitutes and—if he has his way—every wire bet placed west of Chicago. And he does it all with the protection of not only his own paid goons, but also the police and the politicians who are under his control. It’s enough to intimidate even the bravest, street-hardened cop…except, perhaps, for the small, secret crew of LAPD outsiders led by Sgt. John O’Mara (Josh Brolin) and Jerry Wooters (Ryan Gosling), who come together to try to tear Cohen’s world apart. Shooting entirely in and around Los Angeles, including in many of the actual locations featured in the story, “The Gangster Squad” is a colorful retelling of events surrounding the LAPD’s efforts to take back their nascent city from one of the most dangerous mafia bosses of all time. The screenplay is by Will Beall (TV’s “Castle”), based on Paul Lieberman’s series of articles entitled “Tales From the Gangster Squad.” The film is being produced by Dan Lin (“Sherlock Holmes”), Kevin McCormick (upcoming “The Lucky One”) and Michael Tadross (“Arthur”).

If you haven’t seen Gangster Squad trailer, check it out now! 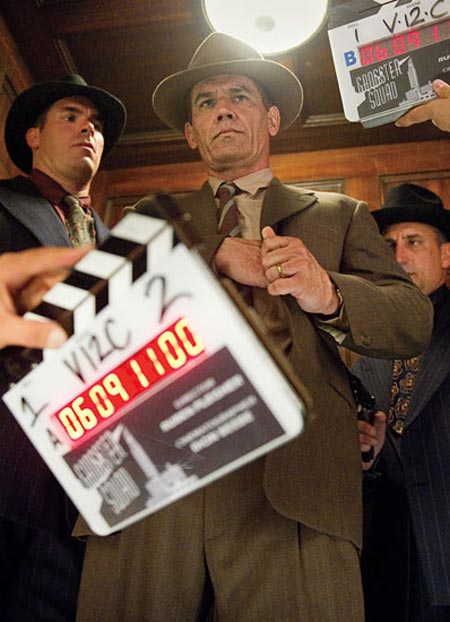