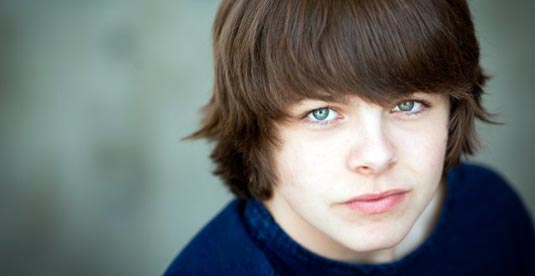 Things are getting quite serious with Gavin Hood‘s upcoming Ender’s Game. We already know that young Asa Butterfield is on board for the whole thing but according to the latest reports, Canadian teen star Brendan Meyer will soon join him. In case you’re not so familiar with this project I will first remind you that Hood’s movie is an adaptation of the Orson Scott Card sci-fi novel of the same name. Movie will focus on a young boy, a genius strategist, who is drafted by the International Fleet to destroy the alien Formic race. At this moment it’s not hard to guess that Butterfield is attached to star as the lead while 17-year-old Meyer is set to play boy named Stilson, who torments Butterfield’s title character during grade school. But, while we’re still here at the cast part, let me just add that Hailee Steinfeld and Ben Kingsley are currently in negotiations to join the project as well. Production on Ender’s Game will start in early 2012, and the movie already has March 15th, 2013 release date.
Continue Reading
Advertisement
You may also like...
Related Topics:Asa Butterfield, Ben Kingsley, Brendan Meyer, Ender's Game, Gavin Hood, Hailee Steinfeld

Eva Green in Negotiations for 300: RISE OF AN EMPIRE
Debra Granik to Write and Direct Adaptation of RULE OF THE BONE
Advertisement