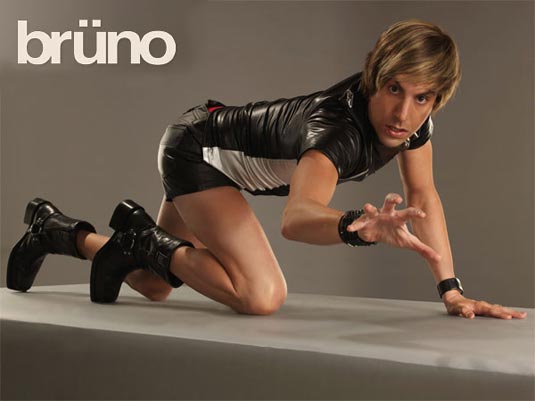 Austrian fashionista Brüno sets off to become the most famous Austrian in history. Hilarious and terrifying, Brüno is an insightful look at American culture. If you’re unfamiliar with Sacha Baron Cohen, think of him as a one-man Candid Camera. Like a possessed Method actor, he disappears into a single-minded character, hurling himself into real-life situations to offend those around him. He’s telling us: Here are people at their most shallow, their most obvious, their most hesitant. He’s telling them: You dimwit, you’ve been had! When Baron Cohen’s act really works — as it did with Borat — there’s biting commentary layered into the humor at nearly every turn. With Brüno’s journey, the humorist’s smarts are too far under the surface…read more [Worstpreviews] In Borat, Baron Cohen exploited Middle America’s prejudice toward Middle Easterners in order to highlight the insipidness of our own fame-obsessed culture. It was the perfect medicine delivered at the perfect time. Those with the ability to keep thinking between fits of laughter will recognize that Baron Cohen is attempting a similar goal here, only this time the “enemy” isn’t thousands of miles away; he’s right here, in our towns, and he could look “just like you or me” as one of Bruno’s interview subjects claims. It’s ironic that a culture fueled by the art and politics of its gay population can simultaneously celebrate their ideas and condemn their actions…read more [TV Guide] I don’t know if there are any comedians working today as fully dedicated to a joke as Sacha Baron Cohen. Despite his body of work being relatively small, I feel that Cohen will be remembered alongside Richard Pryor, Peter Sellers, John Belushi, Buster Keaton, Madeline Kahn and other fearless, dead comics. I say dead comics because someone may very well kill him soon. You can’t continue to tongue kiss men, at length, inside a steel cage at a wrestling match in the heart of Red State America and expect to live long…read more [UGO] 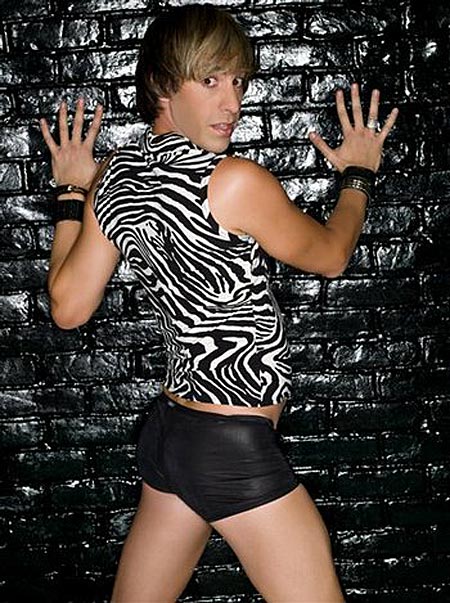 Perhaps the funniest moment in the film is a scene where Paula Abdul agrees to be interviewed by Bruno while using a group of Mexicans as furniture to the point Abdul even uses one of the men as a coffee table for her water. It’s funny. You can’t believe what you are seeing. Does Paula Abdul really have no problem using another human being as a chair? Unfortunately, before the scene goes any further Bruno has his assistant wheel in a naked man with a condom on his penis and a smorgasbord of food on his chest. Abdul is out the door and the scene is done. The moment is lost, whereas a bone-headed interview with Abdul sitting on a human for the duration would have been priceless. Anyone would have left after food was served on a naked man, but not everyone would have given an interview using a human chair…read more [Ropeofsilicon] Mainly though, it sounds like the film contains many references to Nazis and at least one scene which should not be watched by those with delicate temperaments. Gordo warns, “the pygmy sex scene is one of the most horrific incidents ever committed to celluloid. I’m talking fire extinguishers, champagne bottles and mechanically adapted fitness equipment. Teenage boys should under no circumstances watch this with their parents.” Fitness equipment? Well add one more reason to my list of excuses not to go to the gym…read more [CinemaBlend]

Sacha Baron Cohen, at centre as his gay fashionista character, poses in London on Wednesday, outside the British premiere of his new film Bruno.

Brüno, like Borat, is a pilgrimage epic. It’s a journey through and across America in search, not of Pamela Anderson, but of that modern holy grail: celebrity. Sacked from his Austrian television show Funkyzeit, Brüno heads to Los Angeles, in the company of his adoring assistant Lutz (Gustaf Hammarsten). There he makes a pilot, A-List Celebrity Max-Out Mit Brüno, that features him writhing around in slow-motion, a talking penis, and a segment in which famous pregnant women, their foetuses having been scanned, are advised whether to ‘Keep it or abort it’…read more [Telegraph.co.uk] Bruno Video Review: [youtube]http://www.youtube.com/watch?v=HhS9se-7mHI[/youtube] The movie is surprisingly low on laughs, with most of the material coming off as either staged or trying far too hard to shock its audience. Granted, “Brüno” definitely accomplishes the latter (an early scene involving him and his pygmy boyfriend makes the nude wrestling scene from “Borat” look harmless in comparison), but it doesn’t demand the kind of attention that made the last film a culture phenomenon. A grand finale parody of “We Are the World” certainly helps ease the pain, but if you go into “Brüno” expecting “Borat 2,” prepare to be disappointed…read more [Bullz-Eye] When Bruno decides that the only way to become famous is to become straight, the movie strives in vain to grow a spine. Cohen attempts to debunk homophobes while using the randy, gaudy stereotype of Bruno to bait them. You sometimes fear for Cohen’s life, whether Bruno is attending a heterosexual swingers’ party or learning how to hunt with macho men. Too bad his foolhardiness racks up so few comedy points. Bruno isn’t funny or purposeful enough. During Bruno’s talks to clerics who are also gay deprogrammers, movie fans and late-night comedy lovers may think to themselves, “the director did this better with Bill Maher in Religulous”…read more [The Baltimore Sun] Sacha Baron Cohen on Late Show with David Letterman – Top Ten Reasons To See The New Bruno Movie:
Continue Reading
Advertisement
You may also like...
Related Topics:Bruno, Sacha Baron Cohen