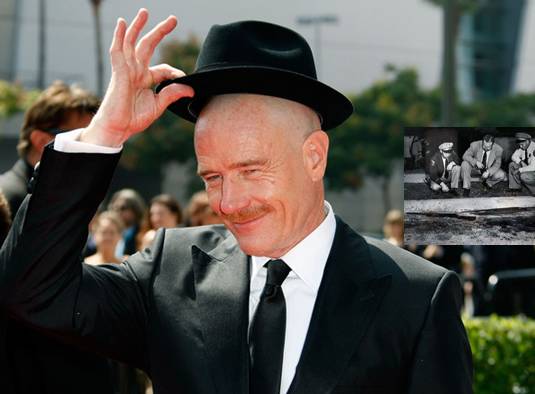 The story of the L.A Police Department fighting gangland killings and trying to stop the invasion of East Coast Mafia in the 1940s is a complex tale filled with colorful characters and acclaimed actor Bryan Cranston will be one of them.

You probably heard that Breaking Bad star was in talks for Ben Affleck‘s next film, Argo and tonight brings news of another film for popular TV series thesp, which will be Ruben Fleischer‘s Gangster Squad at Warner Bros. Cranston continues his transition into film through the role of “Max Kennard, a laconic LAPD officer from Texas who enforces the law ambitiously.”

He’ll join his Drive co-star Ryan Gosling in the period crime drama, which also features Sean Penn, Josh Brolin, Michael Pena and Anthony Mackie. Will Beall wrote the script based on Paul Lieberman‘s series of LA Times articles that explores secret “off the record” police task force who went after a high-profile gangster who was a member of the “Jewish Mafia” in the 1940’s. In other words, two cops (Brolin and Gosling) hunt down famed L.A gangster Mickey Cohen (Penn).

Besides, Gangster Squad is a film that Ben Affleck was offered to direct before Argo. Producers were also talking to Jose Padilha, a well-regarded auteur behind the Portugese-language “Elite Squad,” with its story of crime and corruption on the streets of 1990s Rio that has a few similarities with the midcentury L.A. Warners had obviously been on a manhunt for a helmer, briefly flirting with Darren Aronofsky and Scott Cooper as well, before choosing Fleisher. No doubt, that will be a new road for him and will open up Fleischer to a bigger budget range. After undead action-comedy Zombieland he hopped to 30 Minutes or Less, an upcoming action comedy starring Jesse Eisenberg and Aziz Ansari.

Warner Bros. aim to begin filming Gangster Squad later this year, with a release expected for 2012.

And if you want to see Gosling and Cranston together, check out Drive in theaters on September 16th. But now, check out the official AMC Breaking Bad season 4 trailer and watch only Cranston.