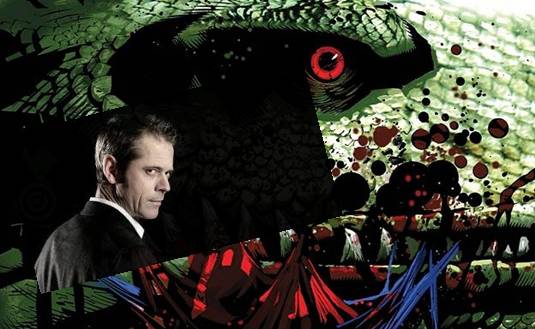 After weeks of guesswork and number-crunching for the upcoming The Amazing Spider-Man villain, actor C. Thomas Howell (War of the Worlds) spontaneously let it slip on who the villain may be. And the villain’s going to be the Lizard.

In a radio interview with The Retroradio, he confirmed his role as a childlike witness as Spider-Man and Lizard battling on the Manhattan bridge.

MovieWeb wrote down on what he said on the radio:

There is not a whole lot to talk about. Sony wants us to be hush-hush right now. I play a relatively small role. I play a construction worker who’s son is caught in the middle of a battle between the Lizard and Spider-Man on the Manhattan bridge. Spider-Man helps me get my son back from this perilous situation. There is some payback there at the end of the movie. Spider-Man is kind of hurting. I help him when all of the other people won’t. Part of the story is, the nation thinks he might be a bad guy. They don’t know what to think. Because of my experience on the bridge with my kid, I know he is a good guy. I pitch in and help out at the end. That is the best way.”

Director Marc Webb is helming the current production in Los Angeles. The film stars Andrew Garfield, Emma Stone, Martin Sheen, Rhys Ifans, Sally Field, and Denis Leary. The flick is from a screenplay by James Vanderbilt and Alvin Sargent and Steve Kloves based on the Marvel Comic Book by Stan Lee and Steve Ditko.

Laura Ziskin, Avi Arad, and Matt Tolmach are producing the Marvel Entertainment production for Sony’s Columbia Pictures to handle the worldwide distribution of it. The film, which is now in production and is being shot entirely in 3D, will be released next year on July 3.

C. Thomas Howell sure leaked a lot for something that is supposed to be “hush-hush.” No worries. The Internet geeks can keep their mouths shut. So please be quiet.

And have a look at trailer for the 1970s live-action Spiderman TV series/films on retro-video. [Source: RetroRadio (via MovieWeb)]