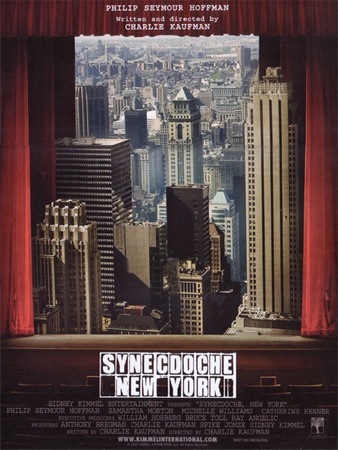 Many of you will recognize Charlie Kaufman’s name from his unique screenwriting credits: Being John Malkovich, Human Nature, Adaptation, Confessions of a Dangerous Mind and Eternal Sunshine of a Spotless Mind. The movie stars Philip Seymour Hoffman, Catherine Keener, Michelle Williams and Samantha Morton. Theater director Caden Cotard (Philip Seymour Hoffman) is mounting a new play. Fresh off of a successful production of Death of a Salesman, he has traded in the suburban blue-hairs and regional theater of Schenectady for the cultured audiences and bright footlights of Broadway. Armed with a MacArthur grant and determined to create a piece of brutal realism and honesty, something into which he can put his whole self, he gathers an ensemble cast into a warehouse in Manhattan’s theater district. He directs them in a celebration of the mundane, instructing each to live out their constructed lives in a small mockup of the city outside. As the city inside the warehouse grows, Caden’s own life veers wildly off the tracks. The shadow of his ex-wife Adele (Catherine Keener), a celebrated painter who left him years ago for Germany’s art scene, sneers at him from every corner. Somewhere in Berlin, his daughter Olive is growing up under the questionable guidance of Adele’s friend, Maria (Jennifer Jason Leigh). He’s helplessly driving his marriage to actress Claire (Michelle Williams) into the ground. Sammy Barnathan (Tom Noonan), the actor Caden has hired to play himself within the play, is a bit too perfect for the part, and is making it difficult for Caden to revive his relationship with the alluringly candid Hazel (Samantha Morton). Meanwhile, his therapist, Madeline Gravis (Hope Davis), is better at plugging her best-seller than she is at counseling him. His is second daughter, Ariel, is retarded. And a mysterious condition is systematically shutting down each of his autonomic functions, one by one. As the years rapidly pass, Caden buries himself deeper into his masterpiece. Populating the cast and crew with doppelgangers, he steadily blurs the line between the world of the play and that of his own deteriorating reality. As he pushes the limits of his relationships, both personally and professionally, a change in creative direction arrives in Millicent Weems, a celebrated theater actress who may offer Caden the break he needs. By seamlessly blending together subjective point-of-views with traditional narrative structures, writer/director Charlie Kaufman has created a world of superbly unsteady footing. His richly developed cast of characters flutter between moments of warm intimacy and frightful insecurity, creating a script that brings to life all the complex and beautiful nuances of shared life and artistic creation. Synecdoche, New York is as its definition states: a part of the whole or the whole used for the part, the general for the specific, the specific for the general. Director: Charlie Kaufman Writer: Charlie Kaufman Starring: Philip Seymour Hoffman, Michelle Williams, Emily Watson, Catherine Keener, Jennifer Jason Leigh , Samantha Morton…
Continue Reading
Advertisement
You may also like...
Related Topics:Charlie Kaufman, New York