Connect with us
Much anticipated and long-awaited fourth installment of George Lucas and Steven Spielberg‘s ‘Indiana Jones and the Kingdom of the Crystal Skull‘, will debut at the Cannes Film Festival then open in theatres world-wide a few days later. 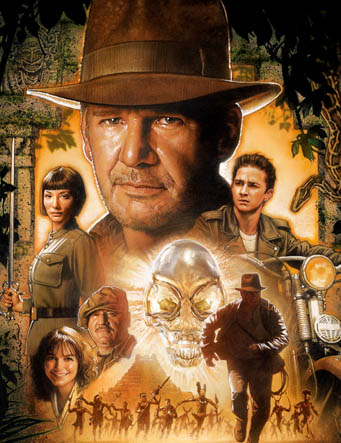 ‘The Da Vinci Code‘ used the same tactic, avoiding Internet spoilers and lots of scolding critics. The Cannes splash on May 18 will be followed by a massive press conference with Steven Spielberg, George Lucas, Harrison Ford and new co-stars Shia LaBeouf and Cate Blanchett. That will be followed by the opening, May 22, which will likely be followed by some sort of box office records. ‘Da Vinci Code’ scooped up $758-million globally even as critics slammed the allegedly lifeless version of the best selling book. Last year’s ‘Pirates of the Caribbean: At World’s End‘ reached $153-million. Can ‘Indiana Jones 4’ do either of the ‘Da Vinci Code’ or ‘Pirates’ numbers? We’ll see. UPDATE 05/18/2008 ‘Indiana Jones And The Kingdom Of The Crystal Skul’ First Reviews!
Continue Reading
Advertisement
You may also like...
Related Topics:Cate Blanchett, George Lucas, Harrison Ford, Indiana Jones 4, Shia LaBeouf, Steven Spielberg