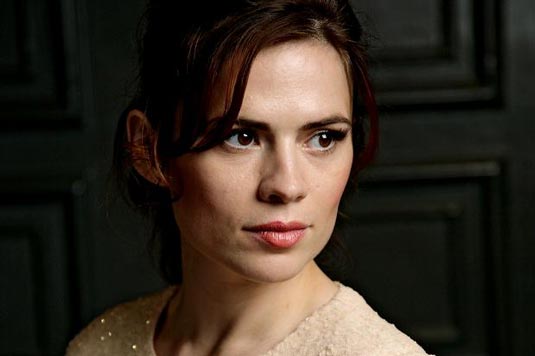 After being secretively shy-ish with ‘I’m not allowed to say yet’, at first, Hayley Atwell had seemingly confirmed she’d be reprising her Peggy Carter role from Captain America: The First Avenger in the 2014 sequel, Captain America: The Winter Soldier. However, a recent interview with the British actress indicates that the headlines were too hasty, it seems. An excerpt from her chat with TimeOut simply reveals, “She won’t, she confirms, be back for the [Captain America] sequel.” Now that THAT is finally cleared, more questions are raised. Considering the character is at least 80 years old in the present-day events of Captain America’s storyline (if you’ve read or seen or ever HEARD of Captain America, you should know that by now), which was confirmed with a deleted scene from The Avengers, an older actress may be sought out. It’s also possible that Steve Rogers and Peggy Carter’s relationship will go into greater detail in a third Captain America film, plans for which have been insinuated, too. Perhaps Joss Whedon, who is acting as Marvel’s creative consultant, will make use of the couple’s touching story for a subplot in The Avengers highly-anticipated 2015 sequel. The writer-director revealed early last year that one of the best scenes he wrote for The Avengers was never filmed and a “beautiful and poignant scene” between Steve and Peggy in the present. What do you think? Captain America: The Winter Soldier will pick-up where The Avengers left off – with Steve Rogers continuing his affiliation with Nick Fury and the peacekeeping organization S.H.I.E.L.D., and struggling to embrace his renewed life and role in the modern world. Directed by Joe Russo and Anthony Russo, from a screenplay by Christopher Markus and Stephen McFeely, Captain America: The Winter Soldier is set for release on April 4th, 2014 and it stars Chris Evans, Anthony Mackie, Sebastian Stan, Frank Grillo, Cobie Smulders, Scarlett Johansson and Samuel L. Jackson.
Continue Reading
Advertisement
You may also like...
Related Topics:Anthony Mackie, Anthony Russo, Captain America: The Winter Soldier, Chris Evans, Cobie Smulders, Frank Grillo, hayley atwell, Joe Russo, Joss Whedon, Samuel L. Jackson, Scarlett Johansson, Sebastian Stan