UPDATE: Below you will find two fairly low-res new photos from the film ahead of its  first trailer online at iTunes Thursday at noon ET/9 a.m. PT. Marvel has just launched the first official poster for their upcoming sequel Captain America: The Winter Soldier and it features star Chris Evans as patriotic superhero with iconic shield on his back. With Marvel’s Thor: The Dark World  heading into theaters in the coming weeks, it’s time to start the hype for the next Phase Two film. The first ever preview clip for Cap’s new adventure will be online this Thursday on Apple and you’ll likely see it play before Thor, too, and is to expect a very different sort of movie than we had before. Directed by Anthony and Joe Russo with a script from Christopher Markus and Stephen McFeely, the new film follows the continuing adventures of Steve Rogers (Evans) still struggling to adjust to present day life, when a powerful new enemy emerges. Scarlett Johansson also returns in the film as S.H.I.E.L.D. agent Natasha Romanoff a.k.a. Black Widow along with Anthony Mackie, Frank Grillo, Samuel L. Jackson, Cobie Smulders, Toby Jones, Emily VanCamp, Hayley Atwell, Maximiliano Hernández, Robert Redford, Georges St-Pierre and Sebastian Stan in the role of Bucky Barnes who will be resurrected as the titular Winter Soldier. Disney releases Captain America: The Winter Soldier next spring on April 4th, 2014. Check out the first official one-sheet and notice the agency’s logo under Evans’ feet. 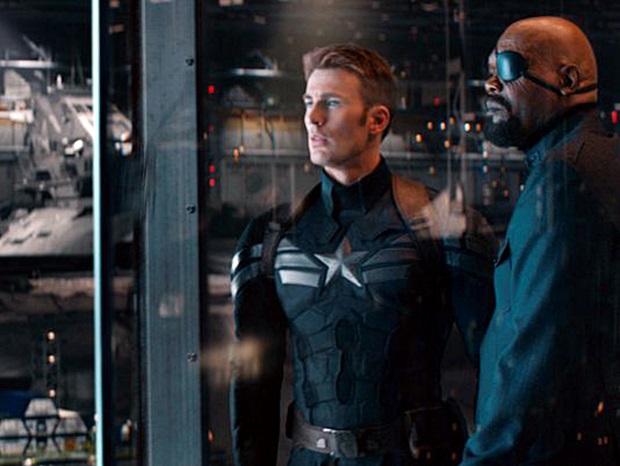 Steve Rogers (Evans) gets used to the modern world with the help of Nick Furry (Jackson). 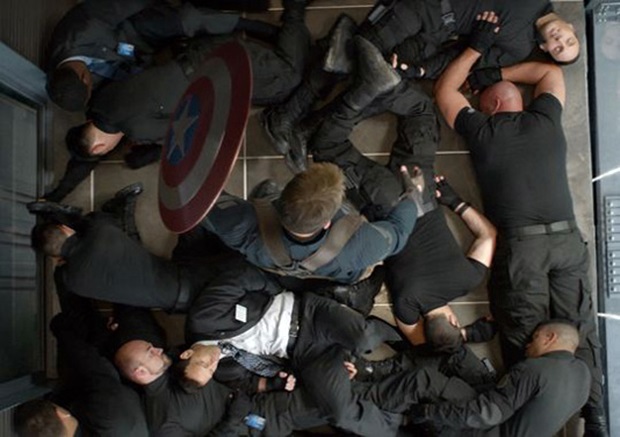 Rogers (Evans) takes out an elevator full of bad guys in this action scene.
Continue Reading
Advertisement
You may also like...
Related Topics:Captain America: The Winter Soldier poster