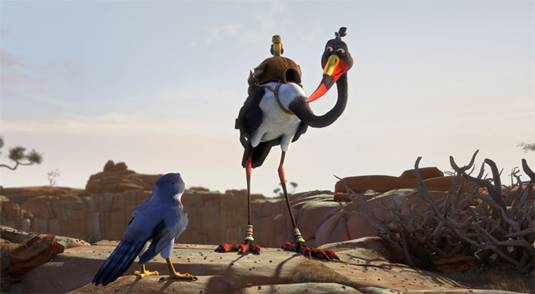 The central theme of the story was penned by South African writers, so it made sense for the film to be produced by a studio who has always been passionate about telling African, yet universally appealing stories. Our co-producers in the U.S., Wonderful Works, saw the potential of an independent studio presenting original stories from South Africa alongside big Hollywood studios which meant that we had to make sure that the movie’s local flavor and humor would also appeal to American audiences.

Helmed by Wayne Thornley and scribed by Andrew Cook, Anthony Silverston and Raffaella Delle Donne, Zambezia follows the adventures of Kai, a flying daredevil young falcon (Suarez) who leaves his remote outpost against his father’s wishes to join the prestigious Hurricane defense patrol that flies the skies keeping Zambezia safe in the heart of Africa. When Kai’s father (Jackson) is captured by the notorious iguana lizard Budzo (Cummings), he and his newly found soulmate Zoe (Breslin) gather all their friends to save their bird sanctuary. So, principal characters are: Kai, a high-spirited Peregrine Falcon; Gogo, a kooky stork; Ezee, a fast-talking, charismatic Nightjar; and Tendai, Kai’s overly protective dad. Check out the trailer for Zambezia 3D: