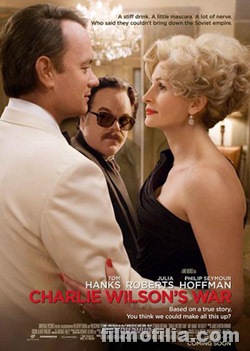 It’s amazing to me that a film like Charlie Wilson’s War, a film about key events in the United State’s history, a film where the consequences of the events are being felt very harshly today, a film with MULTIPLE Oscar winners like Tom Hanks, Julia Roberts and Philip Seymour Hoffman can get so little attention when coming into the theaters. Don’t get me wrong, Charlie Wilson’s War hasn’t been invisible, but you’d expect a hell of a lot better marketing campaign then what it got. Tom Hanks is one of those very few actors that forces you to assume whatever movie he will be appearing in will automatically be quality stuff. His role selection over the years has been insanely good and as a result, his reputation, awards shelf and ultimately his legacy as one of the all time great Hollywood leading men continues to grow. Does Charlie Wilson’s War help or hurt that reputation or legacy? IT HELPS! The Geberal Idea Charlie Wilson (Tom Hanks) is a small time US Congressman who likes to party hard, touch as many women as possible and in general have a good time. However he’s also a man with a soul. When the Soviet Union invades Afghanistan it sparks something in him that drives him to action. Pushed along on this new path by Julia Roberts who plays one of the wealthiest women in Texas who also wants to see the godless communists driven out of Afghanistan, and assisted by an edgy CIA operative played by Philip Seymour Hoffman, Wilson begins to forge an unlikely alliance of Egypt, Pakistan, Saudi Arabia and Israel in a plot to arm the resistance fighters in Afghanistan by raising the money back home, and getting the players in place to carry it all out without the world (especially the USSR) knowing about it. The Good Is it redundant to say Tom Hanks is brilliant? Have we hit that point yet? Well I’ll say it anyway… Tom Hanks is brilliant! The playboy man of influence who also happens to have an conscience is brought to life with totally perfection in such a way that has you feeling the struggle the character has undertaken. One thing that Hanks does so very well that makes him stand out as one of the all time greats, is his insane comedic timing. When used properly, and sparingly in these type of dramatic roles, it brings a dimension of humanity and charisma to his characters, and Charlie Wilson was certainly one of them. Using his subtle talents for comedy, Hanks can take what could be a very heavy feeling film, and make it entertaining and fun to watch without sacrificing the dramatic elements or narrative. I didn’t end up mentioning Hanks in my “BEST ACTOR” category of the 2007 Movie Blog Awards because although Hanks played what was handed to him perfectly, there wasn’t enough for him to do performance wise that put this role at the same level as the one by Daniel Day Lewis in “There Will Be Blood”. Otherwise, a magnificent job. The story is told in a very smooth manner. Although a large span of time is covered in the film, it never feels “jumpy” or disjointed. Even acroos periods of time the story feels very linear (in a good way) with a terrific pace. The story reveals itself to you, answering questions along the way while introducing new situations and questions as you go. You feel the direction of the film is taking you somewhere and rarely gets sidetracked… if it gets sidetracked at all. The ending of the film is quite good leaving us as an audience to ponder larger questions and appreciate the complexity of the world we live in. We can do a great good… but ultimately that “good” can come back to bite you in the ass. There isa story of a Zen Master told in the movie, and it has stuck with me ever since I first saw it. You’ll see what I mean. The Bad The one large weakness of Charlie Wilson’s War is its failure to strike an emotional connection between us, the audience, and the plight of the Afghanistan people who were suffering under the Soviet invasion of their country. The film has a couple of quick sequences that superficially glance over refugee camps, but never lingering long enough, or having the courage to get a bit more graphic with what it shows us, to make us get emotionally invested. The consequence of this is that we never really identify with what was driving Charlie Wilson in the first place. We don’t feel that same sense of horror, outrage or compassion the character feels because we’re never really faced with the horrific realities that Wilson was. This has a viral effect on the rest of the film that neutered much of its potential strength and turned what could have been one of the best movies of the year, into just a very good movie that could have been even better. Overall Terrific performances, well paced and smooth storytelling and a piece of American history that current world leaders would do well to remember make Charlie Wilson’s War a great movie. Sadly, you become all too cognizant that you never get emotionally invested enough to care right along with Charlie, and thus it loses some of its punch. Still, a wonderful movie that many should, and will enjoy. Image Gallery

Juno: Movie Review
‘There Will be Blood’
Advertisement