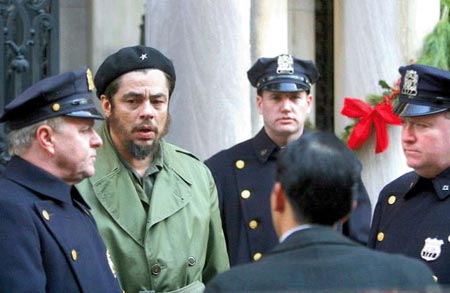 A trailer for the upcoming Steven Soderbergh‘s “Che” movie (The Argentine), starring Benicio Del Toro as the famous revolutionary, has been released. The previous trailers have been aimed at international markets and not included subtitles, but this one remedies the situation quite nicely with a handsome musical accompaniment.

On November 26, 1956, Fidel Castro sails to Cuba with eighty rebels. One of those rebels is Ernesto Che Guevara, an Argentine doctor who shares a common goal with Fidel Castro – to overthrow the corrupt dictatorship of Fulgencio Batista.

Che proves indispensable as a fighter, and quickly grasps the art of guerrilla warfare. As he throws himself into the struggle, Che is embraced by his comrades and the Cuban people. The film tracks Che’s rise in the Cuban Revolution, from doctor to commander to revolutionary hero.

IFC Films is releasing both films together in limited theaters on December 12th, followed by individual theatrical releases for each film on its own starting in early January 2009.