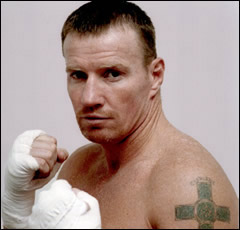 Earlier this month, we wrote that Christian Bale would join Mark Wahlberg in Bryan Singer‘s thriller “Prisoners.” Now, Christian Bale and director David O. Russell are set to join Mark Wahlberg in “The Fighter.” So, this is the second project that Bale and Wahlberg are planning to star in together. “The Fighter” tells the true story of Boston fighter “Irish” Micky Ward and how he was helped to the world lightweight championship by half-brother and his trainer Dicky Ecklund. Ecklund was a journeyman fighter who sent Sugar Ray Leonard to the canvas in 1978. His career was derailed by drug addiction and a prison sentence. Upon his release, he convinced his younger brother, Ward – who had retired from boxing at 26 after losing four straight – to get back in the ring. Under Ecklund’s tutelage, Ward won the WBU Light Welterweight title and engaged in one of the greatest fight trilogies in history with Arturo Gatti. Wahlberg will play Ward, a fighter who was losing bouts and was ready to hang up the gloves when his brother came back into his life. Bale will play Ecklund, whose drugs and robbery spree drew him a 10- to 15-year sentence in state prison. There, he kicked drugs, became a model prisoner and emerged as a changed man who helped his brother reach the glory that eluded him. Over the past few years, “The Fighter” has drawn some of Hollywood’s biggest names. The project first came Wahlberg and Matt Damon (as Micky Ward’s older brother, Dickie Ecklund) toplining for director Darren Aronofsky. Damon dropped out and Brad Pitt was poised to replace him, but the picture still stalled. Then Aronofsky moved on. Production is expected to begin production in July, 2009.
Continue Reading
Advertisement
You may also like...
Related Topics:Bryan Singer, Christian Bale, David O. Russell, Mark Wahlberg, The Fighter