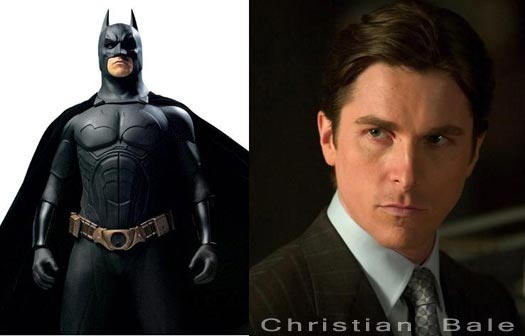 “Batman” himself Christian Bale graces the cover of Details and sat for a lengthy interview. Inside, he talks about his “The Dark Knight” costar Heath Ledger, who plays the Joker. Michael Caine has talked about the intensity of Heath Ledger’s portrayal of the Joker in The Dark Knight. How did you find working with him?

He was incredibly intense in his performance but incredibly mellow and laid-back. Certainly there was this great anarchistic streak to it-just getting dirtier than anybody’s envisioned the Joker before. This character has power because he has no limits-absolutely nothing to lose.

How has Ledger’s death changed the way you look at the film?

Naturally it was something I wanted to share with him–and expected to do so. And I can’t do anything else but hope that it will be an absolutely appropriate celebration of his work.

I was at the Science Museum in London with my daughter and some of her friends, and they wanted hot dogs. And so I went up to a hot-dog stand and I said, “Can I have three hot dogs?” They said, “I’m sorry, we’re closed.” And so I started walking away. And then one of them said, “Excuse me, are you Batman?” And I said, “Well, I play Batman.” And they said, “Well, here’s three hot dogs–on the house.” That’s pretty remarkable, isn’t it?

The late Heath Ledger on his role as the Joker

Continue Reading
Advertisement
You may also like...
Related Topics:Batman, Joker, The Dark Knight