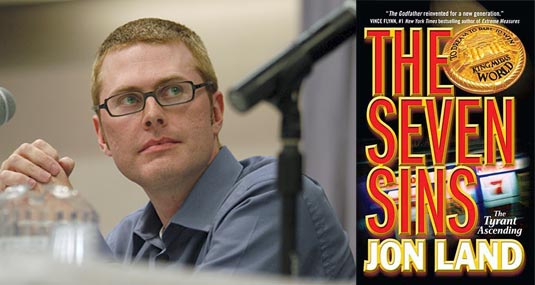 According to THR, Christopher Kyle (“K-19: The Widowmaker,” “Alexander”) has signed on to adapt Jon Land‘s best-seller “The Seven Sins: The Tyrant Ascending” into a feature for Tyrant One Imperium Pictures. The action-thriller centers on Michael “The Tyrant” Tiranno, adopted son of an Italian crime lord called upon to defend the gambling mecca from terrorist attacks. Land has said that the character is loosely inspired by Boccardi’s life story and is designed as the first of a series of James Bond-like adventure tales. Kyle will be submitting his draft to producer Moritz Borman and executive producer Peter Graves. “The Seven Sins: The Tyrant Ascending” summary from Amazon: The Godfather meets the TV series Las Vegas in this collision of money and power. The owner of a newly built casino and hotel, The Seven Sins, Michael Tiranno uncovers a plot to destroy Sin City. The mastermind behind an attack on his property and others on the Strip has a personal vendetta against him. As a child in Italy, he watched as his family was murdered; later, he was taken in by a relative, whom he later realized was the head of a major Mob family. Tiranno thought that by changing his name and severing all ties with his past, he had successfully created a new identity for himself, but who else but someone with a grudge would know about his background and go to such great lengths to see him fail. Land’s books ooze adrenaline, but the over-the-top action is nicely supported by flesh-and-blood characters. He hits on all cylinders here. Expect fans of high-octane thrillers to be clamoring for more Tiranno the Tyrant.
Continue Reading
Advertisement
You may also like...
Related Topics:

Pirates 4 Filming in Hawaii This Summer
Jason Momoa Cast as Conan the Barbarian. Mickey Rourke To Play His Father?
Advertisement