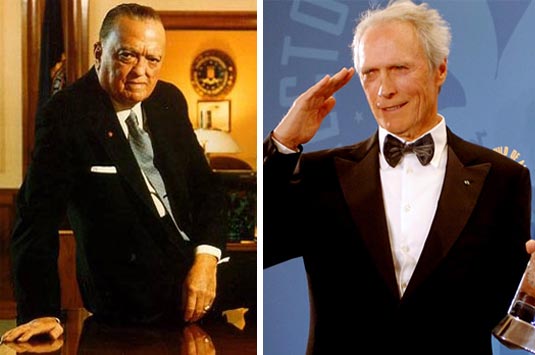 Clint Eastwood will next direct a biopic of controversial first director of the FBI J. Edgar Hoover in a project being developed by Brian Grazer, Ron Howard and Imagine Entertainment says The Hollywood Reporter. The Academy Award-winning director recently completed work on the supernatural drama Hereafter with Matt Damon and Bryce Dallas Howard, and he’s already circling his next project. The script, written by Oscar-winning screenwriter of Milk Dustin Lance Black, was written a year ago and still seems fit enough to remain the working copy. J. Edgar Hoover was the first Director of the FBI of the United States. He was instrumental in founding the FBI in 1935, where he remained director until his death in 1972. Hoover is credited with building the FBI into a large and efficient crime-fighting agency, and with instituting a number of modern innovations to police technology, such as a centralized fingerprint file and forensic laboratories. Late in life, and after his death, Hoover became an increasingly controversial figure. His critics have accused him of exceeding the jurisdiction of the FBI. The most recent portrayal of Hoover on film was in 2009’s Public Enemies. Billy Crudup played the FBI director who guided Melvin Purvis (Christian Bale) through the hunt for Public Enemy Number One, John Dillinger (Johnny Depp). THR says the project used to be set up at Universal, however currently there’s no studio attached. It’s likely, given Eastwood’s long-standing relationship with the studio, that the Hoover film will wind up at Warner Bros. Would you like to see Clint Eastwood direct this biopic? Who should be cast as J. Edgar Hoover? J. Edgar Hoover bio [youtube]http://www.youtube.com/watch?v=UV316AC_YfI[/youtube]
Continue Reading
Advertisement
You may also like...
Related Topics:Clint Eastwood, J.Edgar