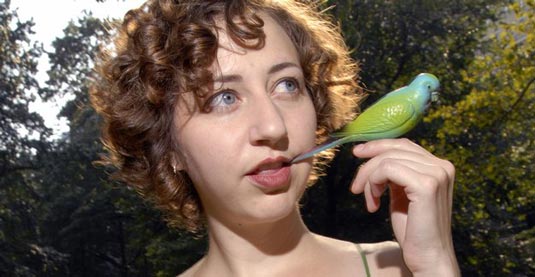 Actress Kristen Schaal is joining the voice cast of DreamWorks Animation’s sequel Cloudy With a Chance of Meatballs 2. Anna Faris, Bill Hader, and Andy Samberg are expected to reprise their roles from 2009’s Cloudy with a Chance of Meatballs. The actress will play an orangutan, although no further character details were given. This follow-up will follow Flint Lockwood (Bill Hader) and his friends, who are forced to leave their hometown of Swallow Falls. They must return to save the day when it is discovered that “sentient food beasts” have taken over the island. Cody Cameron and Kris Pearn are directing from a screenplay by John Francis Daley and Jonathan M. Goldstein (Horrible Bosses). Kristen Schaal voices Louise on the Fox animated series Bob’s Burgers, and lent her voice to Toy Story 3 as Trixie. She also starred in a recurring role on the NBC show 30 Rock, as the new network page Hazel. Cloudy With a Chance of Meatballs 2 comes to theaters December 20th, 2013.
Continue Reading
Advertisement
You may also like...
Related Topics:Andy Samberg, Anna Faris, Bill Hader, Cloudy 2: Revenge of the Leftovers, Cloudy with a Chance of Meatballs, Cody Cameron, Horrible Bosses, John Francis Daley, Kris Pearn, Kristen Schaal, Toy Story, Toy Story 3

Can You Help the BENJI Reboot to Find a Star?
TDKR Billboard Gets Demolished by the Bat
Advertisement