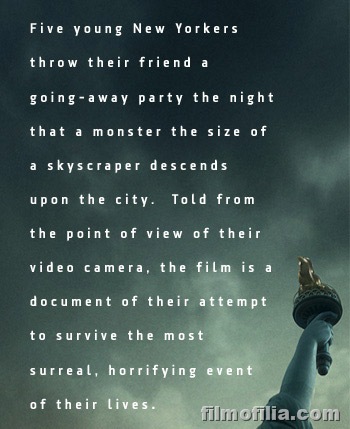 According to AICN, Viacom had a screening of Cloverfield with unfinished visual effects. Sadly the “review” is extremely light on details or any information simply saying “Just saw CLOVERFIELD in a small screening in NYC. IT WAS AWESOME!”
So there you go, some person thought Cloverfield was awesome. Hopefully more information from the screening will leak out. Update: AICN has updated its post with three more “reviews” of the film from three people that saw it. The reviews don’t really reveal much beyond the film point of view is done exclusively through a handheld camera and warns “with easy motion sickness be forewarned.” They also confirm there is one main huge ugly monster and smaller monsters in the film. Overall they where positive about the film but the enthusiasm one expects from a film they might have thoroughly enjoyed isn’t there. Cloverfield Plot Summary “Five young New Yorkers throw their friend a going-away party the night that a monster the size of a skyscraper descends upon the city. Told from the point of view of their video camera, the film is a document of their attempt to survive the most surreal, horrifying event of their lives.” That handheld cam really worries me.
Continue Reading
Advertisement
You may also like...
Related Topics:Cloverfield