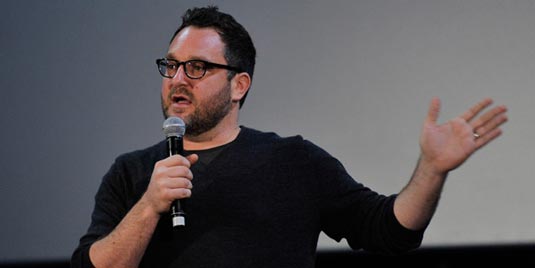 There has been a LOT of speculation on who will direct Star Wars: Episode VII ever since word broke that Disney purchased Lucasfilm and the rights to Star Wars, with plans for a new sequel trilogy starting in 2015. Big name directors including Steven Spielberg, Quentin Tarantino, Zack Snyder and Brad Bird have one by one rejected the idea of directing the picture, but Colin Trevorrow (Safety Not Guaranteed) is a name that keeps popping up now. Namely, a new video interview has surfaced with Trevorrow talking about possibly helming the film, in which he says:

“As far as professional life, I can’t speak with any specificity as to what the next thing will be. There are amazing opportunities that have arisen as a result of this. One of them, I will say, will probably create a great deal of ire against me on the Internet when people find out what it is. So, I just want to say in advance that I promise you, for all of those who love the mythology that I will be tackling, trust that I love it as much as you do. And I will respect it, and hopefully make it not suck.”

Trevorrow also spoke Moviezine during the Stockholm International Film Festival and had the following to say (translated (via GoogleTranslate, so don’t hate me if something is wrong, please) from Swedish):

“I would not comment much on it, but I’m as much a Star Wars fan like everyone else who grew up with it as one of the most important in their lives. I am deeply aware of how incredibly important it is for billions of people. It really is a mythology, and possibly also a religion for many. I can not comment on what my involvement would be, but I can definitely say that I would love to direct a Star Wars movie at some point in my life. It would be incredible. I will not be deterred by it. While I understand that every thinking director who cares about the series as much as I do, would be afraid to ruin something. But I also believe that there is a risk that many directors would gladly take, precisely because they care so much about it. This is a specific example of something that has to feel connected with the earlier films. There will be a sequel to “Return of the Jedi”, in a special world that requires a special style. Whoever makes the film must not deviate too far, at least not with these films… But you know, they will make the Star Wars films as long as we live. Disney has seen what Marvel managed to do, to prove that their universe is infinite. So, the next three films have a responsibility, they are iconic and finishing a story that influenced pop culture for decades. But after that, we will get to see some really awesome movies in the Star Wars universe. We will see daring, exciting directors take on crazy Star Wars movies underwater, and everything. And I look forward to seeing them all!”

A lot of people are writing Trevorrow off as having no chance at the director’s chair – he’s in his late 30s with only the indie film Safety Not Guaranteed in his director’s resume, and I had to look him up on Google for that. Although George Lucas was younger than Trevorrow when he helmed the original Star Wars, he also had two films behind – one of which (American Graffiti) got five Oscar nominations. The only things Trevorrow has on his side is the fact that he would come cheaply to Disney and would be much easier to pressure into giving in to studio demands. For my money’s worth, it is still the choice between Matthew Vaughn (X-Men: First Class) or Jon Favreau (Iron Man). Though, risking does pay off, sometimes, and playing safe turns to be a bummer (remember choosing then no-name Christopher Reeve for the role of Superman? Also, there’s a recent example of Ridley Scott‘s Prometheus for the latter) – and I love good surprises.
Continue Reading
Advertisement
You may also like...
Related Topics:Brad Bird, Colin Trevorrow, Episode VII, George Lucas, Iron Man, Jon Favreau, Marvel, Matthew Vaughn, Prometheus, Quentin Tarantino, Return of the Jedi, Ridley Scott, Safety Not Guaranteed, Star Wars, Star Wars: Episode VII, Steven Spielberg, Superman, X-Men: First Class, Zack Snyder

New Details for Harry Osborn Role in THE AMAZING SPIDER-MAN 2
THE WOLVERINE and MAN OF STEEL Trailers To Debut With THE HOBBIT: AN UNEXPECTED JOURNEY
Advertisement