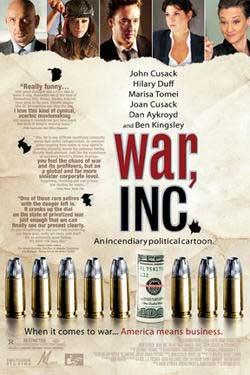 John Cusack is outraged over the Iraq war, so the U.S. actor channeled his anger into a low-budget political satire — complete with a chorus line of scantily clad female amputees – that he hopes will offend. Inspired by anger about the war and questions about the political power held by global corporations, “War, Inc” is set in Turaqistan, a fictional nation occupied by a private U.S. company called Tamerlane and run by a former American vice president. Cusack helped write the screenplay and also stars with Sir Ben Kingsley, Marisa Tomei and Hilary Duff in the film, which premiered this week at New York’s Tribeca Film Festival alongside several more serious documentaries on Iraq and other conflicts. “I think the movie should be kind of offensive,” Cusack told Reuters about the film, which will be released in New York and Los Angeles theaters on May 23. “I’m shocked at how much good reaction we’re getting.”“Sometimes with a serious, somber movie, even though they’re great and well intentioned, it just doesn’t allow you to be outraged because you just get depressed,” he said. “This allows you to actually feel like, ‘Let’s do something subversive.” In the movie, Cusack plays a hit man hired by Tamerlane to assassinate a Middle Eastern oil minister who plans to lay an oil pipeline through Turaqistan, thwarting the company’s plan for sole proprietorship of the country. “‘War, Inc’ was just a reaction to the war and all the insanity behind using the 9/11 attacks to make an imperial land grab in the Middle East,” he said. “We really wanted to channel our outrage a little bit into something creative.” Cusack said he was also inspired by the late director Robert Altman, who made a satirical movie about U.S. medical personnel during the Korean War, based on the book “MASH: A Novel About Three Army Doctors.”

“He said when he made “MASH” he wanted to be as politically incorrect as the war was obscene,” Cusack said. “I don’t think we even went far enough.” Shot in Bulgaria, the low-budget movie has been marketed through Myspace.com. It was shown to a range of high-profile people such as artist Damien Hirst and comedian Sarah Silverman, whose comments have been posted online. Singer Hilary Duff, 20, had a week to prepare for her role as a trashy central Asian pop singer and said that while many families have been devastated by what’s happening in Iraq, she hopes that audiences will see the funny side of the film. “We’re trying to raise awareness with it. It is funny and it is bizarre and a little disturbing,” she said. “But really at the end of the day it’s looking at what (our country is) doing, and it’s not right.” And with U.S. presidential elections looming, Cusack hopes his movie will spur “some kind of resistance of the spirit.” “There’s hopefully an exuberance to the movie because I think being subversive should feel good,” Cusack said. “It should be fun to throw a brick.”