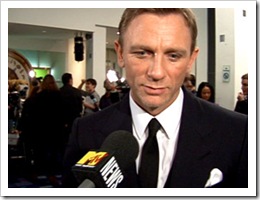 Being James Bond has its advantages — aside from getting to drive that Aston Martin. Daniel Craig is now in the fortunate position of being able to snap his fingers to get what he wants, whether it be to chose a director for the next Bond film or to snag a part in another franchise — not that he’s been abusing the privilege or anything. “Having a sense of humor about it is really key,” Craig said. So when the actor wanted to play a part in the film adaptation of Philip Pullman’s “His Dark Materials” series, he “very cheekily” phoned up one of New Line’s producers, Ileen Maisel, and suggested she make him a lord. “I wanted to be Lord Asriel,” he said, “because I’m such a big Philip Pullman fan.” Craig is also a big Marc Forster fan (“The Kite Runner” is “stunning,” he said), and so he helped pick Forster to helm the 22nd Bond film, which began rehearsals last month and starts shooting in Central America later this month. “When you look at Marc’s body of work, there’s just such a diverse look at the world, and I thought, ‘I want to have that,’ ” Craig said. “Marc is very solid. He knows what he wants, and that’s crucially important, because we need to jump off ‘Casino Royale.’ ” Craig worked with Paul Haggis to develop the script for “Bond 22,” so “it will actually follow on quite closely after the last story. Paul Haggis is someone who can actually take on the story and the character and take it to a different place,” Craig said. “The same rules apply, but the pressure is now on, in a weird way.” Craig said he didn’t mind the criticism and skepticism surrounding his initial casting as 007. “[W]e knew we had something good to do. The thing is, now we have to turn up with the goods,” he said. “If we don’t, then they were right, and that can’t happen.” Though Craig has always been a Bond fan, when the opportunity to play him first came along, he was reluctant, based on the script. “The idea of having jokes in Bond isn’t completely wrong,” he said, “but it should be done as tension breakers, like when we’re on the edge of our seats. But not gags, not written gags. I don’t think that’s funny myself.” Working with Haggis on this script, though, makes Craig more confident that his take on the character will be realized. “It’s nothing but a positive effect,” he said. “The more creative people you can get involved in the process, the better, as far as I’m concerned.” Craig was in the middle of publicity for “Casino Royale” when he started shooting “The Golden Compass,” the first installment of “His Dark Materials,” and had a laugh when he realized that Eva Green was in both movies as well. “So she’s going to be in every movie I make from now on!” he joked. “It’s contractual! No, she was great, great casting. As is Nicole [Kidman, who he co-starred with in ‘The Invasion’]. I couldn’t have thought of a better Mrs. Coulter.” Should “The Golden Compass” take off and become a full film trilogy, Craig’s not concerned about balancing the two film series or their possible conflicting schedules as his part as Lord Asriel grows in further installments. “I try not to count chickens,” he said, “because there’s no point. You’d go crazy. I’m happy with the way this is working out so far. And if they do another movie, we’ll fit it in. It’s not my job to make that work — I pay people fortunes to make them do that!”
Continue Reading
Advertisement
You may also like...
Related Topics:Daniel Craig, James Bond