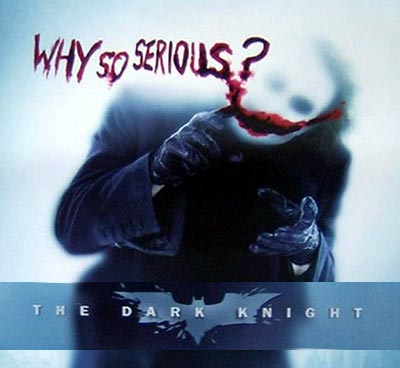 “The Dark Knight” swooped into theaters to gross a record $18.5 million from midnight preview screenings ahead of its official opening on Friday, according to distributor Warner Bros.
WB reported that the $18.5 million did not include 3:00 AM and 6:00 AM. The film opened at midnight and that single session pulled in $18.2 million, outgrossing Fox’s “Star Wars, Episode III: The Revenge of the Sith” midnight screenings which took in $16.9 million in 2005. Estimates for the weekend are now in flux with the $151 million three-day opening weekend record set by “Spider-Man 3” looking likely to fall. A $100 million “Dark Knight” debut would more than double the $47 million opening gross averaged by the five previous Batman movies released by Warner Bros, a unit of Time Warner Inc. Those films have collectively have amassed over $1.6 billion in ticket sales worldwide since 1989, according to box office tracking service Media By Numbers. The fortunes of “Dark Knight,” which cost about $180 million to produce, were further brightened by mostly positive reviews and a record wide release in 4,366 U.S. and Canadian theaters. Box office analysts say the film is almost certain to surpass the $100.1 million debut rung up in May by “Indiana Jones and the Kingdom of the Crystal Skull,” which would make “Dark Knight” the biggest opening so far this year. “Revenge of the Sith,” by comparison, grossed $108.4 million in its first Friday-through-Sunday frame from far fewer theaters than “Dark Knight.” The last Batman movie, 2005’s “Batman Begins,” grossed nearly $49 million its first weekend in North America and went on to collect about $372 million worldwide. “Dark Knight,” picking up where that film left off, reunites director Chris Nolan and star Christian Bale as the Caped Crusader. It also features the late Australian actor Heath Ledger in what turned out to be his last completed screen role, as Batman’s arch nemesis, the Joker. Only 10 other movies have managed to cross the $100 million domestic box-office mark in their first weekends, led by “Spider-Man 3” with $151 million in May 2007 and “Pirates of the Caribbean: Dead Man’s Chest” with $135.6 million in 2006, the biggest July opening on record.
Continue Reading
Advertisement
You may also like...
Related Topics:Heath Ledger, The Dark Knight