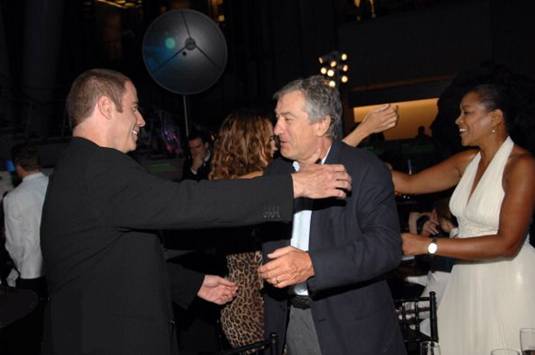 Open Killing Season! Well, tough Serbs still look pretty trendy and John Travolta will be portraying one of them with a hilarious accent. Robert De Niro reportedly replaced Nicholas Cage playing the role of a military vet. By the way, Travolta and Cage were also rumored to be reuniting on Sea Trial too, though things have been very quiet on that front for quite some time now. Mark Steven Johnson will helm from a script by Evan Daugherty. This sounds interesting enough, and all three major protagonists definitely need something to boost their careers. Killing Season begins production January 16th, 2012. It appears Travolta has decided to take on Killing Season instead of Gotti: In the Shadow of My Farther as his next film. It is also the first time the two legendary actors appear together on screen. Image/Millennium and Corsan Pictures are behind the production. De Niro was recently got on board the Shean Penn-directed The Comedian alongside Kristen Wiig and he will next be seen in Garry Marshall’s ensemble romantic comedy New Year’s Eve. Here’s the full press release:

“KILLING SEASON” STARRING ROBERT DE NIRO, JOHN TAVOLTA TO START PRODUCTION JANUARY 16 Co-Production with Corsan Pictures to be Directed by “Ghost Rider” Helmer Mark Steven Johnson LOS ANGELES, CA – Millennium Films and Corsan Pictures will begin production January 16 on “Killing Season,” starring Robert De Niro and John Travolta. Mark Steven Johnson (“Ghost Rider,” “Daredevil”) will direct from a script by Evan Daugherty (“Snow White and the Huntsman”). “Killing Season” is an action movie set in the Appalachian Mountains about an American military veteran (De Niro) who has retreated to a remote cabin in the woods. When a rare visitor, a European tourist (Travolta), appears on the scene, the two men strike up an unlikely friendship. But in fact the visitor is a former Serbian soldier bent on revenge. What follows is a tense, action packed battle across some of America’s most forbidding landscape that proves the old adage: the purest form of war is one-on-one. Nu Image/Millennium is taking the lead on international sales at the American Film Market this week, in consultation with Corsan. “I’ve loved this project from the moment I read Evan Daughterty’s remarkable script,” said Corsan CEO Paul Breuls. “It’s thrilling, imaginative, unexpected and dominated by two extraordinary characters on a collision course. I’m very pleased this film is moving into production and to be partnered with Avi Lerner and his team at Millennium.” “We’re excited to be co-financing and co-producing this film with Corsan, and to be working again with Robert De Niro and John Travolta,” said Nu Image/Millennium topper Avi Lerner. “We’ve never seen these two great actors on screen together before, and we’re excited to see what comes of the combination.”