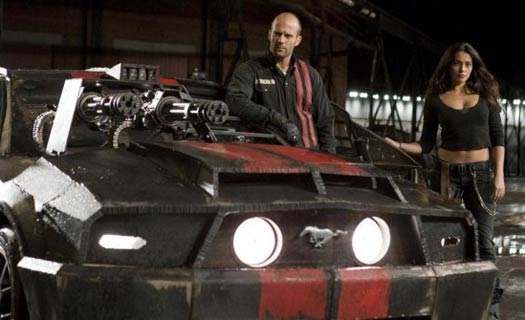 Today we have batch of new shots from the upcoming “Death Race” remake starring Jason Statham (Crank). Jason Statham leads the cast of an action-thriller set in the post-industrial wasteland of tomorrow, with the world’s most brutal sporting event as its backdrop. A penitentiary full of felons has inspired the jailers to create a grisly pastime ripe for lucrative kickbacks. Now, adrenalized inmates, a global audience hungry for televised violence and a spectacular arena come together to form the Death Race. Three-time speedway champion Jensen Ames (Statham) is an expert at survival in the harsh landscape that has become our country. Just as he thinks he has turned his life around, the ex-con is framed for a gruesome murder he didn’t commit. Forced to don the mask of the mythical driver Frankenstein-a crowd favorite who seems impossible to kill-Ames is given an easy choice by Terminal Island’s warden (Joan Allen): suit up or rot away in a cell. His face hidden by a metallic mask, one convict will be put through an insane three-day challenge. Ames must survive a gauntlet of the most vicious criminals in the country’s toughest prison to claim the prize of freedom. Driving a monster car outfitted with machine guns, flamethrowers and grenade launchers, one desperate man will destroy anything in his path to win the most twisted spectator sport on Earth. Starring: Jason Statham, Joan Allen, Ian McShane, Tyrese Gibson. Director: Paul W.S. Anderson Screenwriter(s): Paul W.S. Anderson Producer(s): Tom Cruise, Paula Wagner, Paul W.S. Anderson, Jeremy Bolt The trailer for “Death Race” is scheduled to appear in front of “Wanted” on June 27th, while movie itself is set to hit theaters on August 22nd.
Continue Reading
Advertisement
You may also like...
Related Topics:Paul W. S. Anderson