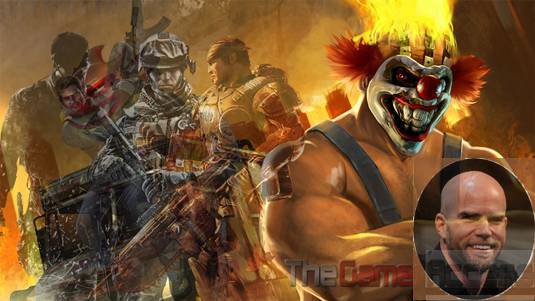 Let’s face it, boys and girls: a live action adaptation of the iconic video game Twisted Metal is on the way! Penned and helmed by Brian Taylor, one of the co-directors of Ghost Rider: Spirit of Vengeance, which opens this weekend! No doubt, one of the closest films to what fans can expect from an adaptation of Twisted Metal. Taylor has signed a seven-figure deal with Sony Pictures, along with the newest version of the game was released for PlayStation 3. The film will preserve such signature contestant characters as Sweet Tooth, a murderous clown who drives an ice cream truck, as well as Doll Face, a young woman who is trapped behind a porcelain mask and who drives an 18-wheeler. The film will stick close to the premise of the game, with the story based on,

an underground event that pits a number of combatants in a fight to the death… The proprietor of the race is Calypso, a string-puller dedicating to examining the human condition, such as what makes a peaceful man violent, what terrifies a violent man and who will make a Faustian bargain in which they risk their lives. The sole survivor will get any wish granted.

No word on a timeline for production yet. This will be the first film that Taylor will work on without his directing partner Mark Neveldine with whom he already planning to complete their Crank trilogy with Crank 3D. Check out the official trailer for the latest offering in the series. [youtube]http://www.youtube.com/watch?v=EsSzd7gvuzo[/youtube]

Continue Reading
Advertisement
You may also like...
Related Topics:Brian Taylor