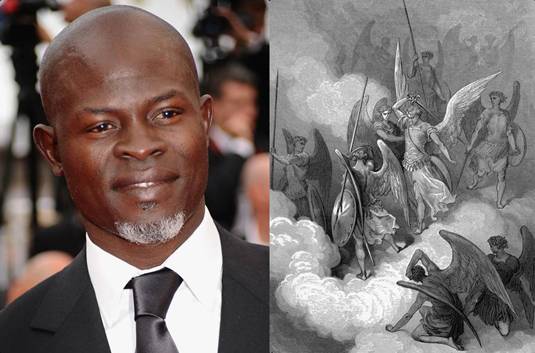 The super-versatile Djimon Hounsou will speak of Abdiel’s words, when he meets Satan on the field of battle and says,

This greeting on thy impious Crest receive (PL 6.188)

Commonly speaking, Oscar nominee Hounsou (Blood Diamond) will play the Angel of Death in Paradise Lost, the Alex Proyas directed Gods vs Gods thriller that is set to lens in Sydney for a January start of production. The same Paradise Lost will probably hit theaters in late 2013. Hounsou has joined Bradley Cooper and Benjamin Walker. Cooper is set to star as the anti-hero Lucifer, who rebels against God when humanity is created; Walker soon joining him as the archangel Michael, who faces off against Satan when he starts war on God. In original poem, Abdiel is an angelic compatriot of Lucifer who remains loyal to God. Big-budget action 3D interpretation of Seventeenth Century John Milton’s epic poem is product of many writers working on the script: Byron Willinger and Philip de Blasi wrote an early draft; Stuart Hazeldine developed that draft and Lawrence Kasdan and Ryan Condal were hired to do a ‘polish’ work. Proyas version will include three major battle sequences that will take place in Heaven, Hell, and Eden and therefore Abdiel will be in position to reprise his warrior training from 2000s Gladiator, playing a role of Numidian tribesman Juba. Besides his famous roles in Blood Diamond and In America, Hounsou had his straight-to-DVD movie Elephant White being released earlier this year. He has most recently seen in a several movies including The Tempest and Never Back Down. So, check him out in a big-screen adaptation of Shakespeare’s mystical thriller The Tempest, along glorious Helen Mirren. [youtube]http://www.youtube.com/watch?v=GKG4nRtOwrA[/youtube]