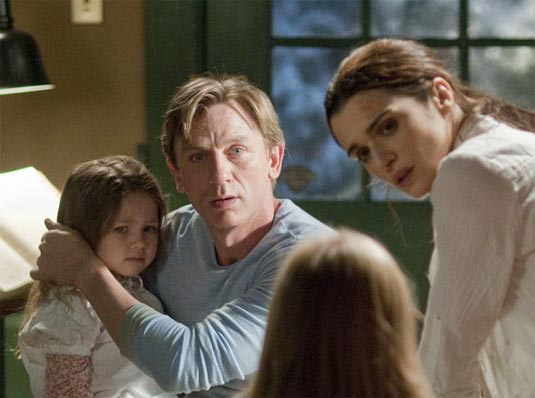 So, anyone out there knows who’s Peter Ward? I have no idea, but I would definitely like to find an answer to that question, and that’s one reason more for me to check out the upcoming Jim Sheridan’s thriller Dream House, which will hit the theaters on September 30th. Don’t know why, but I’m quite interested to see why some movie blogs out there actually hate this movie already. New clip for Dream House has debuted online. As you already know, Sheridan’s supernatural thriller stars Daniel Craig, Naomi Watts and Rachel Weisz and in this new clip you’ll have a chance to see how cute Weisz can be even when she asks some silly questions, like – who’s Peter Ward? Probably nothing silly in that one at all, but at this moment, it looks like she comes to Craig in order to annoy the shit out of him. Nice try! And here’s the synopsis part for the whole thing: “Some say that all houses have memories. For one man, his home is the place he would kill to forget. Daniel Craig, Rachel Weisz and Naomi Watts star in Dream House, a suspense thriller about a family that unknowingly moves into a home where several grisly murders were committed…only to find themselves the killer’s next target. Successful publisher Will Atenton (Craig) quit a job in New York City to relocate his wife, Libby (Weisz), and two girls to a quaint New England town. But as they settle into their new life, they discover their perfect home was the murder scene of a mother and her children. And the entire city believes it was at the hands of the husband who survived.When Will investigates the tragedy, his only lead comes from Ann Paterson (Watts), a neighbor who was close to the family that died. As Will and Ann piece together the disturbing puzzle, they discover that the story of the last man to leave Will’s dream house will be just as horrifying to the one who came next…” Don’t forget, Dream House hits the theaters on September 30th!
Continue Reading
Advertisement
You may also like...
Related Topics:Daniel Craig, Dream House, Jim Sheridan, Naomi Watts, Rachel Weisz