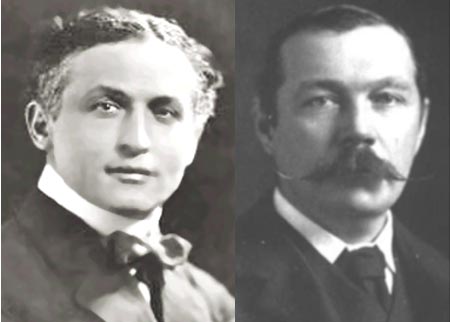 DreamWorks has acquired an original script by J. Michael Straczynski, titled Voices from the Dead. This interesting script is actually a fictional story of magician Harry Houdini and Arthur Conan Doyle (Sherlock Holmes creator) who teamed up with a psychic to solve bizarre murders in New York during the 1920’s. Harry Houdini was magician and escapologist, stunt performer, actor and film producer noted for his sensational escape acts. He was also a skeptic who set out to expose frauds purporting to be supernatural phenomena. Arthur Conan Doyle was physician and writer, most noted for his stories about the detective Sherlock Holmes, which are generally considered a major innovation in the field of crime fiction. He was a prolific writer whose other works include science fiction stories, historical novels, plays and romances, poetry, and non-fiction. The two met in 1920 and became fast friends, despite their disagreements about the supernatural, and Doyle included a chapter in his book “The Edge of the Unknown” that asserted Houdini had psychic powers. This friendship definitely deserves big screen adaptation, and it already sounds like an entertaining movie, I’m sure you agree. Straczynski’s credits include The Changeling and Ninja Assassin and he was also a writer-producer for Babylon 5 and Jeremiah. Project hasn’t been set with a producer, but we definitely expect to hear more details about Voices from the Dead as soon as possible.
Continue Reading
Advertisement
You may also like...
Related Topics:Arthur Conan Doyle, Harry Houdini, J. Michael Straczynski