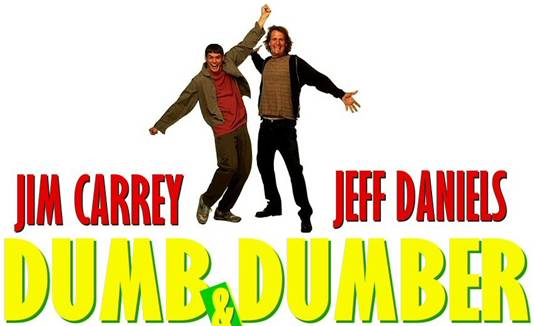 The chances for a follow-up to the 1994 hit comedy Dumb & Dumber was one out of a hundred. The cross-country adventures of two good-hearted and incredibly stupid friends is on the way again and it’s not a kind of April Fools’ jokes. Jim Carrey and Jeff Daniels will both return to play Lloyd and Harry, with the Farrelly brothers directing again. The original film’s co-director Peter Farrelly said that Dumb & Dumber will go in front of cameras this fall.

Sean Anders and John Morris, who previously wrote ‘Hot Tub Time Machine’ and ‘Mr. Popper’s Penguins,’ are penning the script, but the project has not been given the green light just yet. Check out video for Dumb & Dumber created like it is an adrenaline packed suspenseful thriller. How about having similar idea for a sequel? [youtube]http://www.youtube.com/watch?v=zLDx-BPgxxA[/youtube]
Continue Reading
Advertisement
You may also like...
Related Topics:Dumb and Dumber 2, Jeff Daniels, Jim Carrey, John Morris, Peter Farrelly, Sean Anders

Roland Emmerich in Talks to Direct WHITE HOUSE DOWN
Are the Rumors About New STAR WARS Episodes True?
Advertisement