‘Duplicity‘ is an enormously entertaining Hollywood escapade, cramming in enough upscale locations, narrative switchbacks and romantic intrigue to keep an audience rapt. But there’s a sneaking suspicion we’ve seen this before: James Newton Howard’s overbearing beats ‘n’ strings soundtrack is never more than David Holmes-lite, while both Owen and Roberts seem a little too at ease in this polished world of power suits and snappy repartee…[TimeOut London] MI5 agent Ray Koval (Clive Owen) and CIA operative Claire Stenwick (Julia Roberts) shared a night of passion in 2003 before she double crossed him the next morning. Five years later they cross paths again when they’re both working for corporate CEO Richard Garsik (Paul Giamatti), stealing business secrets from Garsik’s rival Howard Tully (Tom Wilkinson). But it turns out Ray and Claire have their own plan to screw over both companies so they can make off with millions, and each other. The buzz: Writer-director Tony Gilroy’s follow-up to his critically acclaimed Oscar nominated debut “Michael Clayton” also marks Roberts’ first leading role on screen since 2004’s “Closer” (which happened to co-star Owen in a role that landed him an Oscar nomination). Add in reliable character actors Giamatti and Wilkinson and you seem to have a can’t miss proposition for discriminating adult audiences… [MetroMix] 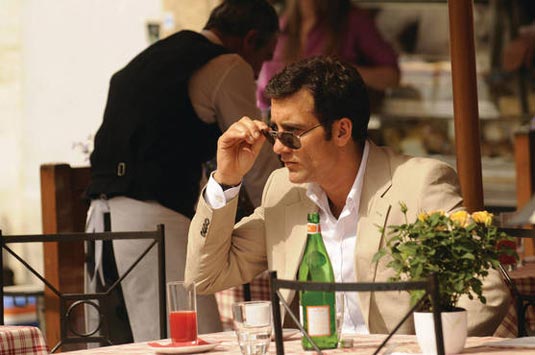 Duplicity isn’t quite as clever as it wants to be, but it’s diverting and funny, and it’s always a pleasure to watch a movie that relies on brains as fodder instead of brawn. Gilroy raises pertinent questions about self-interest and greed in these days of corporate gluttony and provides enough twists on the movie’s central question — Who’s gaming whom? — to keep you from getting lost in the nonlinear storyline. (Duplicity also raises the important question of whether you would risk your job in these tough times for a roll in the hay with Clive Owen. Each woman must answer for herself.)…[Miami Herald] …But now we have Duplicity, an effervescent burst of snappy writing, direction and star chemistry that burns a hole through the screen. Julia Roberts and Clive Owen are as funny and sexy as Rosalind Russell and Cary Grant ever were, and it’s a joy to traipse along with them through this twisty, smarty-pants adventure. Packed with lush locations, snazzy gizmos and gorgeous outfits, Duplicity proves again that writer-director Tony Gilroy is uncommonly skilled at latching together the pieces of classic Hollywood genres and coming up with something even better than what he started with…[CimenaBlend] For someone who made his name in Hollywood as a crackerjack screenwriter, Tony Gilroy seems, with Duplicity, far more adept with the camera than the written word. With his directorial follow-up to Michael Clayton, Gilroy returns to the world of corporate espionage, though this time he plays his spy-thriller material for fun, his characters’ use of champagne corks to send secret signals proving apt for a film aimed at delivering fizzy thrills…[Cinematical] Much like he did in his Bourne scripts and in the back-and-forth twists of Michael Clayton, Gilroy keeps the action fast and on its heels, moving through flashbacks and various locales with stylish fervour. There are problems, however. The first is the script; while its language is loaded with zingers and clever twists, brought to life by the high calibre cast, the consequences and of course, the “gotcha” exposed at the end feel rather trite and hardly the risky business one had hoped for…[Exclaim.ca] In order to really enjoy DUPLICITY, you really need to go into the film fairly cold, so I’m going to be fairly light on spoilers. The trailers have already given too much away, so if by some miracle you still haven’t seen a trailer or TV spot, DO NOT watch them. Basically, Owen & Roberts play ex-spies with a complicated romantic history, that now find themselves working as corporate spooks. Roberts is working for Tom Wilkinson, who’s the CEO of a major corporation that’s on the verge of unveiling a revolutionary new product that corporate pirate Paul Giamatti is dying to get his hands on. Enter Owen, who’s working for Giamatti. The product itself isn’t revealed until late in the film, but it’s got to be one of the cleverest MacGuffins ever committed to celluloid, and would have made Hitchcock proud…[Joblo] 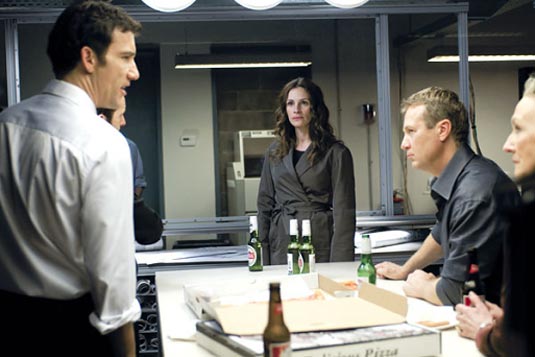 Hopefully by then they’ll have a film that doesn’t shoot itself in the foot. Duplicity really is a lot of fun but it hurts itself by telling a non-linear story when it didn’t have to. What could have been a great little film in a lackluster movie season is marred by it’s greatest strength. Tony Gilroy does have a great direction and there are bits to enjoy, notably the opening credits and any scene Roberts and Owen share. However when you have so much stuff to follow in the main narrative, it hurts and takes away from the overall film when you throw in flashbacks we ultimately didn’t need. Duplicity is a fun, adult film that will please crowds but should have been a lot more than it is…[Atomic Poporn] The chemical combustion just isn’t there between Julia and Clive, and you can’t help wondering if Gilroy wrote this with George Clooney in mind. Still, a glamorous, diverting escapade that over-30s in particular can enjoy…[Empire] Julia Roberts and Clive Owen at the Duplicity Premiere” [youtube]http://www.youtube.com/watch?v=uEwO4tlNBfk[/youtube]
Continue Reading
Advertisement
You may also like...
Related Topics:Clive Owen, Duplicity, Julia Roberts, Tony Gilroy