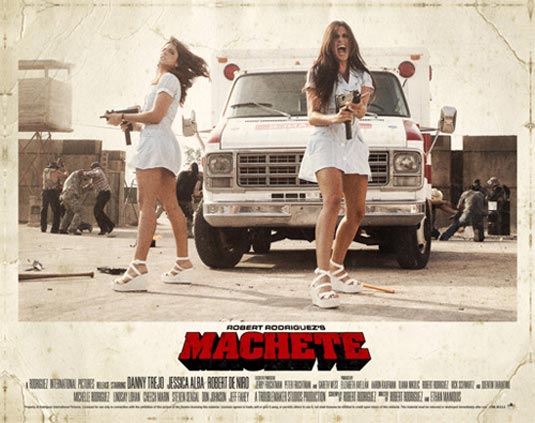 Surprise, surprise! The Avellan sisters Electra and Elise are going to reprise their roles in the upcoming Machete Kills sequel. Yeah, like Jessica Alba, Michelle Rodriguez, Amber Heard and Sofia Vergara were not enough. But hey, when things go wrong it’s always safe to have a pair of kick-ass nurses around you, so what the hell… Now in case you’re wondering why should anything go wrong in Robert Rodriguez‘s Machete sequel, I will just remind you that Danny Trejo a.k.a. ex-Federale will this time get recruited by the President of the United States to track down an arms dealer before he launches nuclear weapons. And when you have Charlie Sheen on board to play the President, as well as Mel Gibson as that crazy arms dealer mentioned above – everything could go wrong! Not to mention that Demian Bichir also stars in the whole thing. So we definitely need some girl-power in here. Do you agree?
Continue Reading
Advertisement
You may also like...
Related Topics:Amber Heard, Charlie Sheen, Danny Trejo, Demian Bichir, Jessica Alba, Machete Kills, Mel Gibson, Michelle Rodriguez, Robert Rodriguez, Sofia Vergara